Twenty Years Ago We Had a Countdown to Britneys 18th Birthday

Peek-a-boo! Britney Spears has grown upand boy does it show!

20 years ago a tabloid magazine proclaimed the accession of Britney into legal adulthood with a photo spread on her 18th birthday party at Halo nightclub in the West Village. It featured the star in a matching snakeskin suit and miniskirt, mugging with her mother, Lynne, and some hometown friends. The night before, she had been the special guest performer at the annual Rockefeller Center Christmas Tree Lighting where she sang "Silent Night" in her already signature breathy warble, swathed in a white fur duster coat, her bob-length barrel curls whirling in the winter gusts. There was still one year left of the Clinton administration and Baby One More Time was holding steady at #5 on the billboard charts more than a year after its release.

1999 had been an unbelievable year for Britney, but one that she had arguably been imagining since she started working professionally at 8 years old. The video for Baby had premiered on MTVs TRL just over a year to the day and has since, in the intervening 21 years, been regarded as a pop music page marker for the approaching millennium while immediately enshrining Spears as a certain kind of sexual ideal for the moment: hot, blonde, unchallenging. Her label, Jive Records, wanted the video to be animated, but Spears herself conceived of the iconoclastic tarted-up school girl, belying an early shrewdness and self possession that goes against the narrative that she was an unwitting pop-puppet. 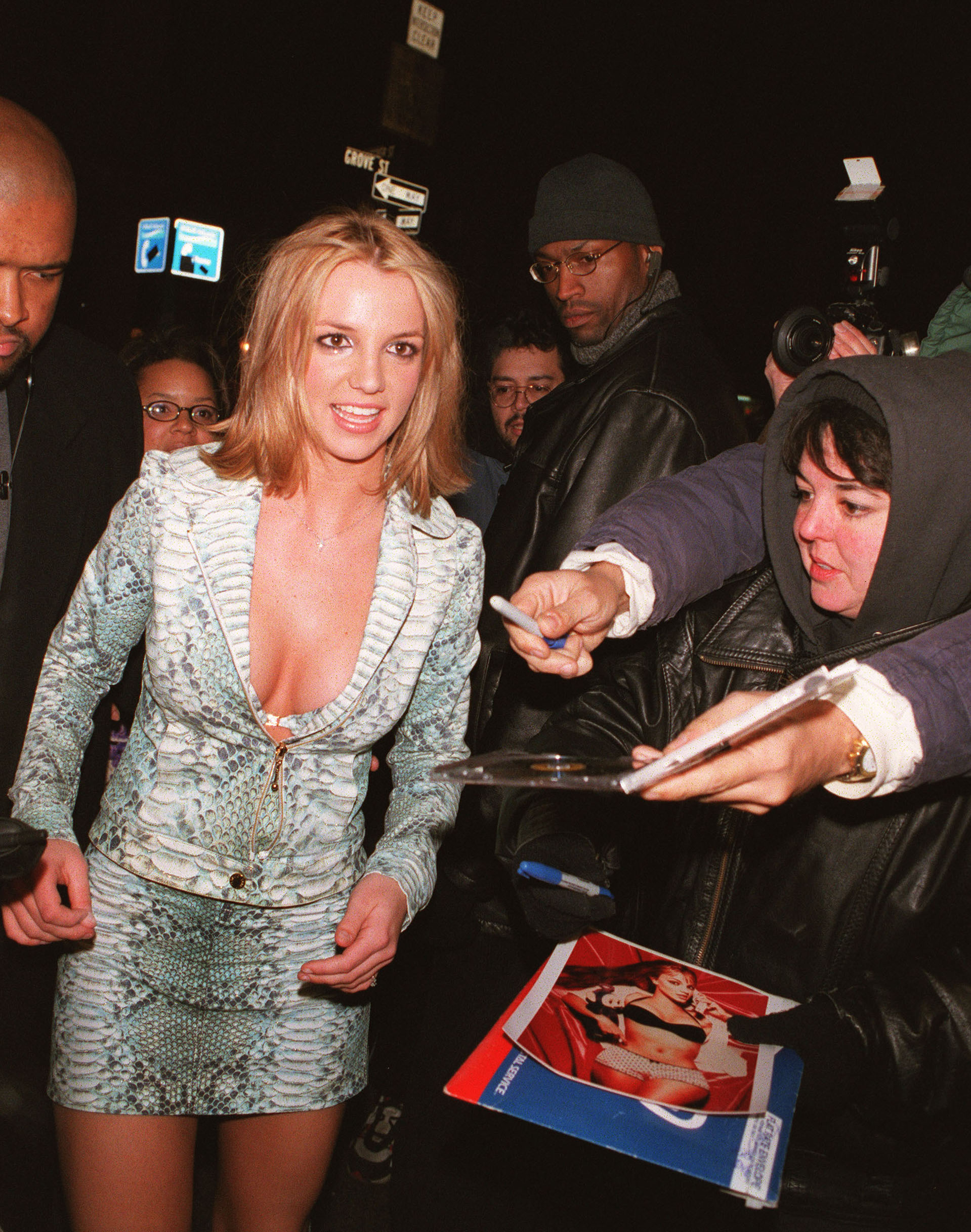 There was also at the time in 1999 an overwhelming, and unapologetically coarse, preoccupation with three things re. Spears: her virginity, the existence or not of breast implants (they existed, but a Rolling Stone story a decade later confirmed they were removed once her body fully matured) , and perhaps the least prurient, who she was dating. It was also one of the first examples of the birthday coundtown, an obsession, if not a burgeoning national pastime, of marking the days until teenage female celebrities turn 18. A phenomenon that now, though not entirely derided, feels within the subject's powers to call out. Britney had arrived right in the sliver of time before the megaphone of celebrity could be harnessed outward, through social media, and was fully in the hands of an insatiable press and global fandom directed at its young, vulnerable stars.

That Spears came of age (figuratively and legally) right as the world was mentally resetting to zero for the 2000s, psyching itself up for a golden age of technology and ease, seems fitting. She was young and beautiful which is to say hopeful, and espoused a naive yet sexual promise. But the following decade for Britney and for all of us was darker than any slick new millennium marketing could gloss over. The chaos and terror wrought through wars and violence not to mention the insidious micro-effects of the internet that awaited us were somehow embodied in Spears own personal turmoil, which we all watched play out (and survive) in the intervening decade. So where are we and her these 20 years thence? 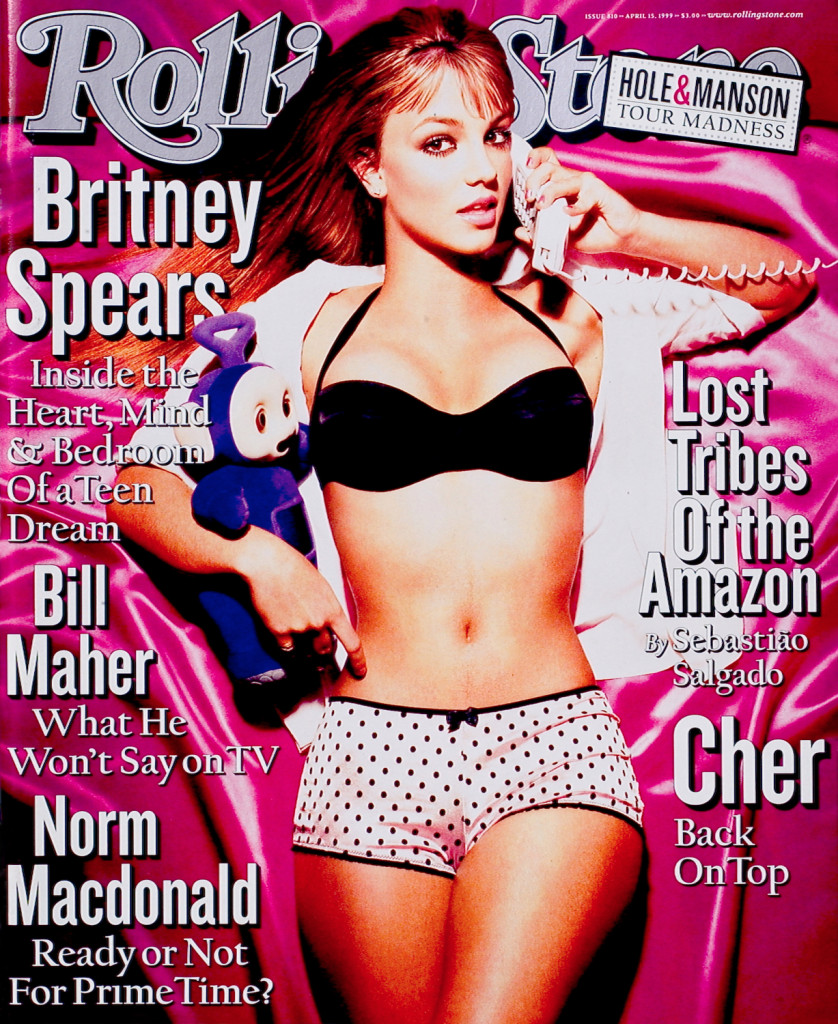 It would seem from all outward appearances that, at age 38 this Monday, December 2, we are in a period of Pax Brit-annica, the main portal to her life being her own personal Instagram, through which we all have access, as opposed to the shambolic paparazzi images of a decade ago. The Britney of 2019 posts fall into a few distinct categories: one being a preference for Facebook-adjacent affirmations or poetry (The would is the place where the Light enters you); another being her mesmeric self-filmed videos modeling outfits by herself at home, usually in body-cleaving mini dresses and towering stilettos, a spray of tousled blonde hair shunted to one side. And then there are the posts with her boyfriend, the model and personal trainer, Sam Asghari, who, despite Spears fame and place as a caryatid in the pop cultural pantheon, makes them seem like any other chronically toned and tanned fitness couple. Which is to say all together the message, from Britney her self, is one of sun, sweat, and health (grumblings about her ongoing conservatorship aside).

2019 is ending less vertiginously than 1999 did for Britney as her fame is one of settled fact than on the white hot rise as it was then. Her sunny, cloistered life transmitted through Instagram is a soothing antidote to a previous era when news outlets had her obituary at the ready. This coming year will see a pop-up experience dedicated to Britney called The Zone in LA, as well as a jukebox musical of Spears songs currently testing in Chicago, called "Once Upon a One More Time," about a group of fairytale princesses meeting for book club who discover Betty Friedans Feminine Mystique, an apt, if totally absurd, set of circumstances that only a former mouseketeer who became a grown woman in front of an unforgiving world, like Spears, could embody.

A week ago, in typical earnest, cloying style, Britney posted a video of herself saying that of all the places she has traveled, home is where the heart is. Writing in an additional caption: Im just as curious about the music in the background and halo effect as anybody is. Some kind of celestial bells are clanging in the background and a ring of light circle her cascading, messy bun. The 18 year old Britney ringing in adulthood at Halo (long closed) is now, two decades later, the 38 year old that has found some kind of peace and glory talking into a phone in her own backyard. Whether this years halo is real or something we imagine for her, the urge to see it at all is effect enough.