#SaturdaySpotlight is on Clare Revell & Convergence!

I mentioned a couple of weeks ago that I was heading to Bandera this weekend for Cowboy Mardi Gras but that the spotlight would still go on and so it is!

My guest today, fellow Pelican Book Group author, Clare Revell is no stranger to our blog. She has shared treasureswith us and been in the spotlight several times. But today, Clare is sharing with us her brand new novel, Convergence so please give her a huge Welcome Back Clare! Even as a teenager Yvetta Graham had vivid dreams. Ones she couldn't tell from reality. Only now she's almost thirty and beyond such things.

Only the new store manager is a dead ringer for the man from those dreams. Who is John Smyth? What is his reason for coming to Headley Cross? Is he really a time traveller?

As dreams and reality converge Yvetta is in a fight for both her sanity and soul.

Extract:
Someone was following her. The steps were light, but audible on the large grey flagstones that lined the floor of the castle. It couldnt be Blaize. Hed had to go out, fulfil his duty as sheriff and deal with something in the village.
Yvetta didnt mind being alone. After all, as Blaize kept pointing out, with the amount of servants he had, shed never be truly alone. What she objected to was being followed. She spun around, determined to have a go at whoever it was, but there was no one there. Shaking her head, she turned back to face the other way and crashed straight into a tall, black figure standing there.
Im sorry. I didnt see you, she began.
The figure turned. The faceless, nameless one moved towards her. Etta.
She screamed.
Terror filled her. She backed away. Her feet tangled in her floor length skirt, and she reached out, struggling to regain her balance.
Her outstretched palm caught the flame of the torch on the wall.
Pain seared as she fell.
Her arms flailed, legs kicked as she tumbled endlessly down, down, down.
****
Yvetta glanced at the clock as she stood in the kitchen waiting for the kettle to boil. Three AM; or stupid oclock as she preferred to call it. She couldnt think, the music running through her mind made thought impossible. Her hands shook as she tossed a teabag into her favourite mug. Her hand hurt. She glanced down and ran her fingers over the vivid red mark across the palm. She winced. If she didnt know better shed say shed burnt it while she slept, but she wouldnt tell anyone it was happening again.
It was far safer not to.
The nightmare still floated on the corners of Yvettas mind. She hadnt thought about him for years, never mind dreamed about him anymoreuntil tonight. But nothing had changednot even the dream injuries transferring to reality. Music, dancing, the castle, and him.
Blaizeher Dancing Boy had grown to be a man. He was tall; easily over six feet now, but hed towered over her even in her teens. He was a few years older than her, no more than five, but that hadnt mattered. His piercing gaze had shot straight through her, almost as if he could see her innermost thoughts, which on reflection, maybe he did because he always knew what she was thinking; and that wasnt necessarily a good thing, either.
Sometimes he wore his long, blond hair spiked up, sometimes it flowed loosely across his shoulders, but tonight it had been tied back with a simple, black velvet ribbon.
He was slimly built, but with an athletic body encased in fawn, old fashioned breeches, dark brown knee length boots, and a navy blue frock coat, with gold buttons. He cut a dashing figure. His white shirt had a bunch of lace at his chinlike the highwaymen had in story books, but Blaize wasnt a scoundrel or cadhe was one of the nicest people she knew. He was always accompanied by a monkey, a tiny, ugly thing with a penchant for wearing clothes.
How long had it been since hed crossed her mind? Blaize that was, not the monkey. Shed been seventeen, so almost half a lifetime, since shed last seen him. Why now?
WOW Clare, you sure know how to hook 'em and reel 'em in! GREAT excerpt! 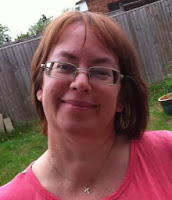 CLARE REVELL is a British author. She lives in a small town just outside Reading, England with her husband, whom she married in 1992, their three children, and unfriendly mini-panther, aka Tilly the black cat. Clare is half English and half Welsh, which makes watching rugby interesting at times as it doesnt matter who wins.You can find her at Website,Facebook,Twitter,Blog,Pintrest
Instagram,Amazon UK,Amazon.com,Pelican Book Group,BookbubandGoodreads

Convergence can be purchased at Amazon, Amazon UK, B&N, and Pelican Book Group.

Hope you enjoyed today's spotlight friends and that you'll check back weekly and leave a comment to be entered into my monthly gift card giveaway!