Whether you have a labrador only in need of a quick brush or a spaniel that requires more attention, follow our gundog grooming tips. A decent pair of thinning shears can work wonders, advises David Tomlinson

The level of grooming required varies enormously between gundogs. While spaniels with their long coats require some time and effort, with a labrador you can get away with just a quick brush. Follow David Tomlinson’s gundog grooming tips to discover the best and most effective techniques.

Many working dogs have never seen a brush in their life, but regular grooming can assist with all manner of health problems. Read gundog grooming: take pride and groom to find out more.

In general, our sporting dogs are low-maintenance so there’s no need to spend hours gundog grooming with a brush or currycomb. I was reminded of this some time ago when I borrowed a foxhound bitch from the hunt kennels and took part in a local companion dog show. We found ourselves in the ring behind an exquisitely groomed Afghan hound. I asked the dog’s handler how long she spent grooming it: “Oh, about an hour a day,” she replied.

Gundog grooming requires different levels of maintenance. Labradors do appreciate being brushed and it helps keep the short, dense, waterproof coat looking its best. Use a bristle body brush to remove dried mud and dust from the fur. Indoor labradors moult more or less continuously and by using what the dog-show people call an undercoat rake you can remove lots of the dead fur before it falls out on the carpet. However, a quick brush once a week is all most need and, I suspect, rather more than most receive. 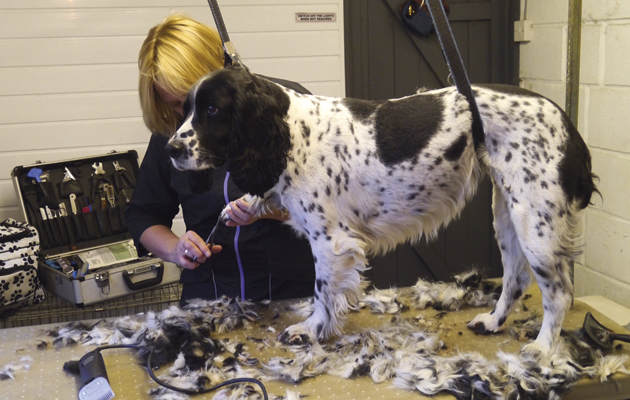 The writer’s spaniel, Rowan, being stripped for the summer.

With spaniels, gundog grooming becomes another matter. Their feathers trap and hold dirt so they need regular grooming. Most of my English springers have had silky coats that have been relatively easy to keep clean, though they have certainly benefited from brushing, especially after shooting days. They have also required gentle trimming of their feathers and ears to keep them looking smart – an easy job with a decent pair of thinning shears. Thinning shears are much more forgiving than scissors and most serious spaniel people frown on using mechanical clippers. I did, too, until a few years ago when I met Jimmy Shuttlewood and his English springers in North Yorkshire. Shuttlewood is headkeeper on the Snilesworth and Whorlton moors, and is famous for his pack of black-and-white spaniels.

Shortly before the opening of the grouse season he clips his spaniels using horse clippers, a job that takes him around 15 minutes a dog. Shuttlewood is convinced that his springers not only work better but are also much more comfortable than they would be unclipped, as it can be hot work for a dog on an August moor. As a result, his dogs do look rather like short-legged pointers. Apart from helping to keep them cool, the other benefits of gundog grooming are that it’s much easier to spot any nicks or cuts they might sustain, and to find and remove ticks. There’s much less need for brushing at the end of a day’s shooting, too, an important consideration when you have lots of working spaniels.

Two years ago I followed the Shuttleworth example of gundog grooming techniques. The younger of my two spaniels has a woolly coat that’s prone to producing excess feathering, so she went off to the professional dog groomer. She came back looking like a puppy, with the clipped coat emphasising her smart, spotty, black-and-white markings. Best of all, she was clearly much happier and cooler during the summer months without a thick, hot coat. The pundits will warn you that clipping a spaniel’s fur will result in a noticeable change in its texture when it grows back, with a much greater tendency to go curly. I have noticed nothing of the sort and she now gets stripped three times a year.

Her groomer, Jan Williamson, tells me that she is now stripping more spaniels, pets and workers, cockers and springers, as increasing numbers of owners appreciate the benefits of having a clipped spaniel. “It’s particularly important to trim the fur in the pads,” she told me, “as mud tends to get trapped and caked here, forcing the toes apart. The undersides of spaniel ears are also prone to getting badly matted and clipping is the best way to solve the problem. Working springers and cockers tend to carry much less feather than their show counterparts but they still benefit from trimming.” In the summer and autumn the countryside is full of seeds that get trapped in a spaniel’s fur, with cleavers (or goosegrass) being one of the major offenders, together with the Velcro-like burs from burdock. Both will still stick to a clipped spaniel but it’s much easier to remove them.

With regard to gundog grooming, I am convinced of the advantages of clipping spaniels but persuading my fellow spaniel owners remains a challenge. In case you are wondering, my foxhound failed to get a rosette. Not surprisingly, the beautifully coiffured Afghan was placed first. I don’t think the judge had ever seen a foxhound in a ring before but perhaps I should have spent some time with a brush, burnishing the hound up before she went into the ring.