Fantastic beasts and monsters in heraldry

Walk round our ancient houses and churches to discover a ferocious bestiary of dragons, wyverns and griffins, says John J Tunesi of Liongam

Today, dragons, unicorns and other such beasts are represented in novels and computer games, but heraldry began as an early system of identification, says John J Tunesi of Liongam. These fantastic beasts, both real and mythical, can be found everywhere, from football t-shirts to banks, stately homes and cathedrals.

For more, learn about the fascinating royal coats of arms that adorn our churchs, read royal coat of arms: spotted nave gazing.

Keen to join our tradition? Enjoy your first SIX ISSUES of The Field for only 6 by clicking on this link.

A new generation of adults and children has been exposed to the world of fantasy beasts and monsters by authors such as JK Rowling and George RR Martin in books, film and via computer gaming. Advances in cinematography and animation have given life to the real, mythical and fantastic beasts known to historians and heraldists.

Mythical beasts, both fantastic and diabolical, from the medieval romances as well as from Greek, Roman, Norse and Saxon myth and legend, such as the phoenix, unicorn and Pegasus, are to a certain extent recognised. The unicorn has had a recent and profitable resurgence, in a largely pastel and fluffy way, in a market aimed at young girls. But there are many more beasts, some better known than others, especially in the world of heraldry where beasts and birds both zoological and terrific can be represented on a shield of arms, on a crest atop a helm as well as supporters in an achievement of armorial bearings. 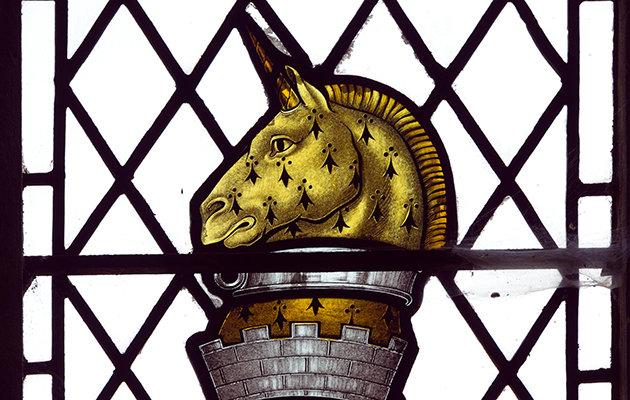 Beasts as charges on a coat of arms were and are often used by the herald in the composition of a unique armorial achievement for a client. In medieval times, large households would have possessed some manuscript books composed of vellum and illuminated.Amongst these may have been a bestiary, literally a compendium of beasts. Originating in the ancient world, bestiaries were made popular in the Middle Ages. They illustrated and described various animals that had been seen by travellers, and their attributes. These animal qualities, such as courage, were often chosen to represent the knightly virtues of a person who used a coat of arms or a crest. For example, a lion symbolises courage, nobility, royalty, strength, stateliness and valour, because historically it has been regarded as the king of beasts. Therefore, it is no surprise that the lion can be found in many coats of arms, the most recognisable being that of England. The symbolism of the lions of England is recognisable to most people in the country. Similarly, other animals have been used to symbolise a nation, such as the unicorn and lion for Scotland, the dragon for Wales and the very rarely seen stag for Ireland. Certainly, bestiaries influenced early heraldry, acting as a source in which to dip and to allow the art form of armory to develop into a cohesive science. Today, bestiaries and their modern equivalent continue to give a lead in the designing of new coats of arms.

At the end of the 11thcentury, as heraldry as a system of identification began to develop, animals were often used to represent the virtues of kings and emperors pictorially on their coats of arms. They were then represented in literature and on decoration on monuments, tiles and glass and on the livery of retainers. This latter is, in substance, no different to a football team supporter wearing a T-shirt to represent his or her allegiance. 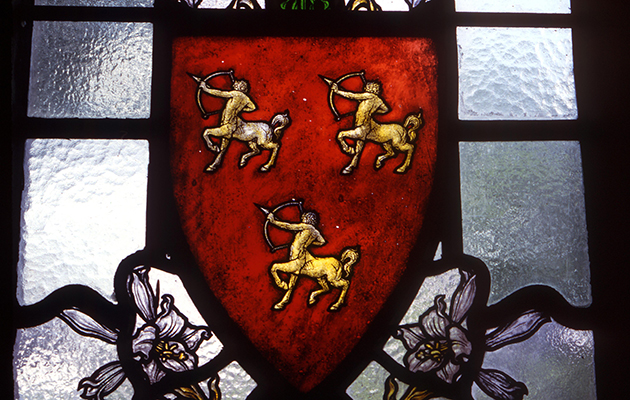 Centaurs appear on a shield in the stained glass at St Marys Church, Worsbrough, South Yorkshire.

Essentially, these early coats of arms were simple and striking in design so the anonymous knight in his chain mail, armour and enclosed helmet could be identified by friend, or foe, on the battlefield. As heraldry as a form of visual identification for knights on the battlefield became more organised and hereditary within families, animals such as lions, leopards and elephants were adopted on coats of arms rather than the more simplistic lines of partition such as the chevron, bend or fess. Perhaps, the medieval mind thought that the bearing of a lion on a shield or as a crest would imbue the knight with the characteristics and qualities of the beast itself, such as bravery and steadfastness on the field of battle.

These real animals, such as the lion and elephant, had been recorded by adventurers on their travels and were later to be seen in the Royal Menagerie, but there was another angle, too: that of the mythical beast or monster.

The likes of the basilisk, dragon, centaur, griffin, harpy, mermaid and merman, phoenix, unicorn and yale and the more obscure, such as the bonacon are the stuff of legend and myth. Tales of these fabulous beasts and monsters come down to us from the myths of Greece, Rome and the Celtic tradition, the tales of King Arthur and his Knights of the Round Table and associated texts, based on the oral tradition. 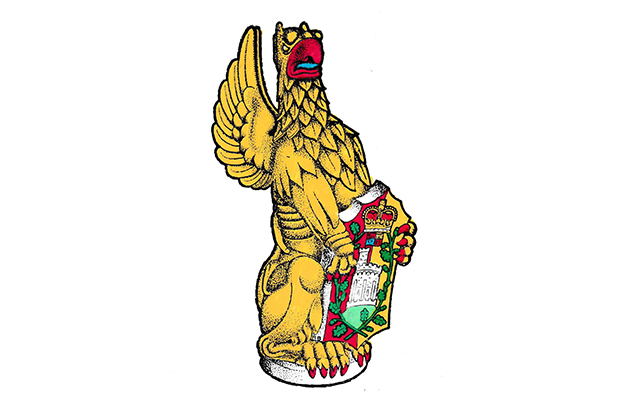 The griffin of Edward III.

Many heraldic monsters are amalgams of several zoological creatures. The griffin is said to be the guardian of treasure and was used as the heraldic badge of the former Midland Bank. In this manifestation, the griffin is guarding twenty bezants, the bezants being representative of gold coins and can be blazoned, in the language of heraldry, as Within a circlet of twenty bezants a griffin segreant or. It is interesting to note that in the series of TV advertisements for the Midland Bank broadcast in the UK some 20 or so years ago, the griffin was given a male voice, but in error; a griffin is the female of the species, while the male griffin has no wings and has rays being projected out of his body.

The griffin, used as an heraldic badge by King Edward III, is one of the menagerie, if we may call it as such, known as The Queens Beasts and has the hindparts of a lion and the head, breast, claws and wings of an eagle. Another is the yale of the Beaufort family, the descendants of the four children of John of Gaunt by his then mistress, Katherine Swynford, who were legitimised after the couple eventually married. The Royal Family is descended from the Beauforts in the female line, the most well-known being Margaret Beaufort, mother of King Henry VII. 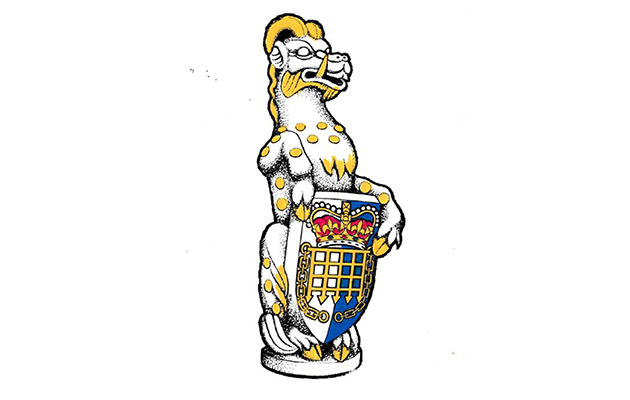 The yale is another strange amalgam of a creature in that it has a body much like that of an antelope with a lions tail. The Beaufort yale is white, its body being powdered with gold bezants. Its horns, tusks, hooves and tufts are all gold. One notable feature of the yale is that he can swivel his horns, but in most depictions the horns are generally shown fore and aft.The yale is one of the heraldic monsters mentioned in Classical times by Pliny.

Outside of the menagerie of The Queens Beasts there are many other examples of the weird and wonderful. A relation to both the dragon and wyvern is the hydra, not of the Greek and Roman mythological sea serpent genus but a dragon-type monster with seven heads. Strangely, the hydra came very late into the British pantheon of heraldic beasts and monsters in that it was granted in 1927 as a crest to Alexander Crispin, Lord of the Manor of Dodbrooke in Devon, the crest being blazoned as A hydra statant proper.

The basilisk, or the amphisian cockatrice,is much like the common or garden cockatrice save that with the basilisk its tail terminates with a dragons head. The basilisk is a fearsome monster in that its breath, voice and even its gaze can be fatal to those who are unfortunate enough to encounter one. The cockatrice is a dragon-like creature and can therefore fly, but the basilisk of antiquity is a pure serpent, sans wings. The boy wizard Harry Potter,
it will be remembered, encountered the basilisk in Harry Potter and the Chamber of Secrets. The common factor with the dragon and its cousins, the wyvern, hydra, cockatrice and heraldic basilisk, is that they all have avian qualities as they are adapted for flight with a pair of bat-like wings to allow them to have dominion in the air. 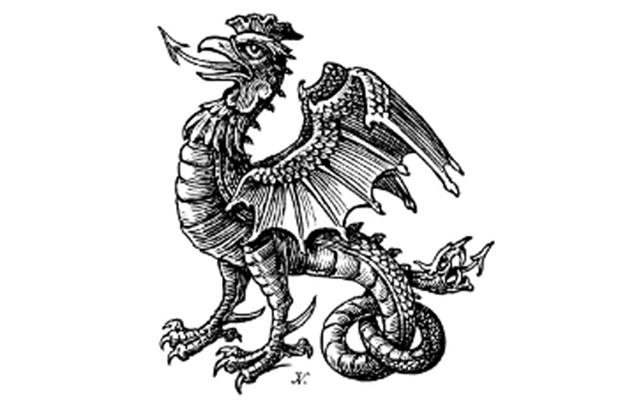 The tail of the basilisk, or amphisian cockatrice, terminates with a dragons head.

Another monster, although appearing to be a much gentler one with an equine and avian aspect, is Pegasus, the winged horse that in classical mythology sprang from the lifeblood of the Medusa when Perseus took off her head with his sword.

Over the centuries, heralds have often recorded Pegasus as a charge upon arms. One notable example is the arms of the Honourable Society of the Inner Temple, although these arms, I believe, are still without authority. In the past, Pegasus has appeared, naturally enough, on the badge ofHMS Pegasusand is currently borne as the central motif of the badge of 18 Squadron RAF.Therationaleof the latter reflects the history of the squadron during World War One, when it was associated with the cavalry corps on the Somme.

However, one monster that one would attempt to avoid at all costs was the bonacon, also described by Pliny the Elder in hisNaturalis Historia. Its appearance was bovine but with a horses mane and tail. Its horns, which turned inwards, were next to useless in a defensive situation but its armoury is not at its front end. The bonacon defends itself by turning on its enemy and expels a vast amount of excrement so intense that the result is said to have been able to cover three acres. The product of this rearguard action was so hot that apart from being excessively noisome it would set fire to any vegetation and trees it happened to reach. Pity the poor individual who was not quick enough to get out of the way Although I have not discovered a bonacon being employed as a full charge in British heraldry, the crest of A Bonacons Head erased and gorged with a ducal coronetwas granted in 1560 to a gentleman by the name of Richard Chandelor. 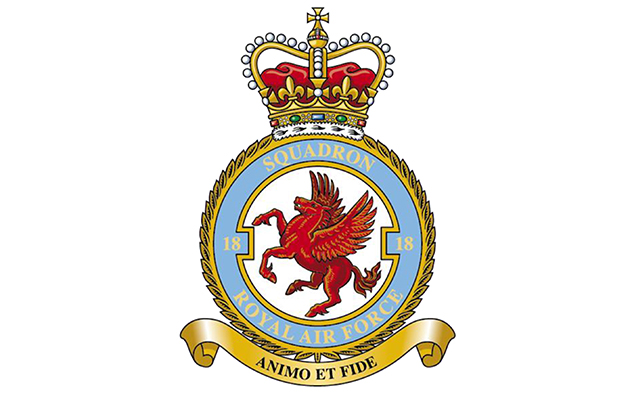 Pegasus features on the badge of 18 Squadron RAF.

The awe, thrill and apprehension that these fantastical creatures must have had on the medieval mind, can be conjectured. For individuals, whether high or low born, the impact of the stories, symbolism, colour and form of these beasts must have heightened the senses through Classical literature, oral storytelling, sculpture and painting. Our great cathedrals and churches were a kaleidoscope of colour and allegory both inside and out. The nascent science of heraldry or armoury would also have had a similar impact, be it on the battlefield, on liveried retainers or as architectural and decorative features.

Throughout the United Kingdom, these heraldic beasts are to be seen everywhere if you take the trouble to seek them out.They appear on banks, government and public buildings, on signs outside your favourite hostelry, upon the coinage in your pocket and if you venture into our great cathedrals, churches and stately homes you can discover a riot of beasts and monsters.

John Tunesi is the secretary of The Heraldry Society. The Society holds regular lectures in London on heraldic themes, including beasts and monsters, and all are welcome. For further details, visit: www.theheraldrysociety.com.

We are grateful to Robert Brown FHS for permission to reproduce his artwork of the Yale of Beaufort and the Griffin of Edward III.