There are nine community property states in the United States of America. They are:

What Is a Community Property State?

What do most of these states have in common? This map will demonstrate it well. 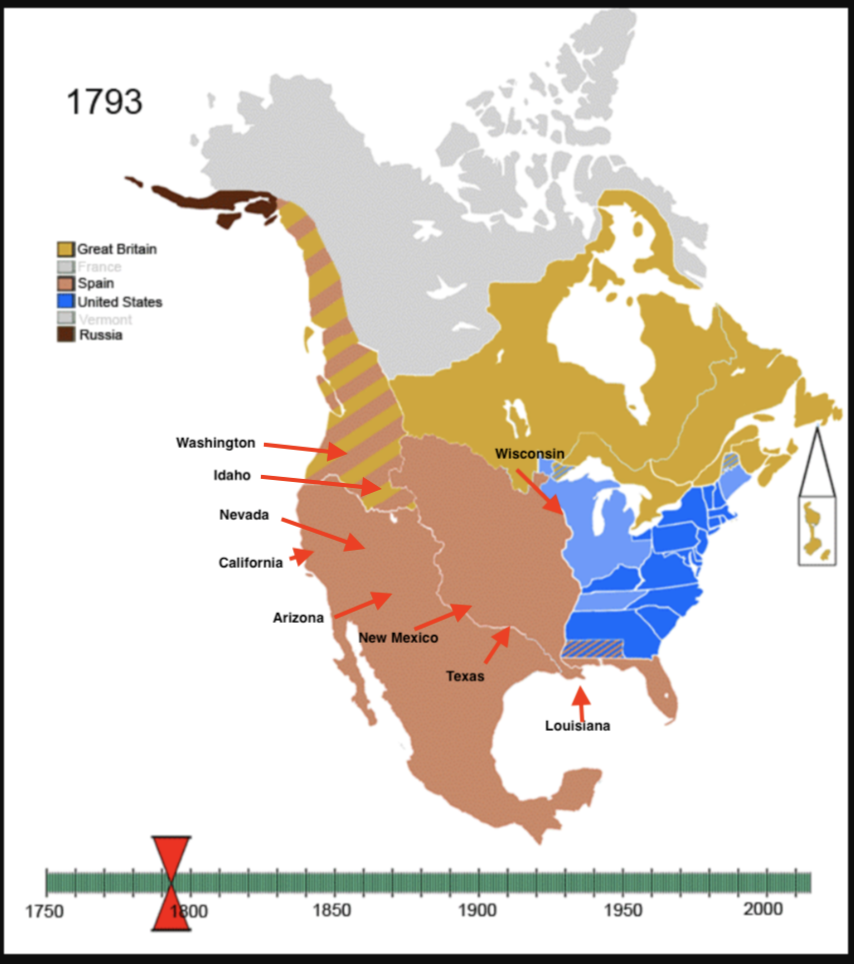 As you can see, all of those states (with the possible exception of Wisconsin, which was awfully close) were part of New Spain, aka Mexico, and brought some of the customs of Spanish/French (civil) law rather than English (common) law into their state constitutions. Under civil law, spouses were considered to be equal economic partners, it was an “amoral business relationship”. Assets and income acquired during the marriage belong equally to both partners. Under common law, a man has a “deeply rooted moral obligation to support his wife and children”, but basically assets or income acquired during a marriage belong to the person (historically the man) who acquired them.

History lesson over, but the modern-day ramifications of all that history are that when you file your taxes as Married Filing Separately (MFS) in one of those community property states, you split your income 50/50, no matter who earned the income. This has serious ramifications on the federal Income-Driven Repayment (IDR) and Public Service Loan Forgiveness (PSLF) programs. See this post, How Does Married Filing Separately Affect Student Loans by Andrew Paulson at StudentLoanAdvice.com, for a deep dive into this issue.

As you may or may not recall, the most complicated student loan strategies involve married couples where one or both partners are going for some type of student loan forgiveness. Sometimes it makes sense for these partners to enroll in PAYE (not REPAYE, which looks at both spouse's income) and to file their taxes MFS, even if it increases their tax bill somewhat (as it often does, especially if their incomes are unequal) in order to have lower IDR payments and thus have more of the loan left to be forgiven.

The reason these strategies typically work is that your payments are only based on your income and maybe your income is lower than your spouse's. To learn about this topic in-depth, see the article, How Does Married Filing Separately Affect Student Loans by Andrew Paulson, CSLP and Lead Student Loan Consultant at StudentLoanAdvice.com.

But in a community property state, splitting your income can essentially nix any benefit of filing MFS.

Community property status is just one more variable in an already complicated calculus.

However, there is a situation where being in a community property state makes the MFS/PAYE trick work even better than it usually does. Consider a couple where Jamal is a physician making $300,000 with $500,000 in student loans enrolled in PAYE for the last 5 years and going for PSLF and Latifa is a social worker making $30,000 without any student loans. If they were in Florida, a non-community property state, their numbers would look like this:

So filing MFS results in paying $2K less a year in student loan payments, but paying $16K more in taxes. Not a good move.

But what if they lived in Texas, a community property state? Then what would the numbers look like?

Now their tax bill is exactly the same whether they file MFJ or MFS, but the PAYE payment drops dramatically. Now they've saved $16K a year. Over the course of the next five years, until Jamal gets PSLF, this couple will save $80K. If he were going for PAYE forgiveness, the difference between Florida and Texas would be three times as great (although some of that would be eliminated as a result of having a larger tax bomb at the end because PAYE forgiveness is taxable).

Let's take a new married couple in a new situation. We'll call them Julie and Sally. They're both doctors in Washington, but Julie has both the lower income and the higher student loans. She has decided to go for PSLF in 7 more years (she made 3 years of payments in residency). Sally is a high-powered surgeon, but her parents had a big 529, so her loans are much smaller and in fact, she already refinanced them and expects to pay them off this year.

Seems like a big win, right? They're saving $25,000 per year in payments. But what if they moved up to Alaska?

They pay $2K more in taxes, but save a whopping $32K a year in student loan payments. Add it all up and they're saving $5K a year. Talk about geographic arbitrage. And that's not even counting the value of the Alaska Permanent Fund Dividend.

At any rate, it demonstrates how being in a community property state can hurt you, even if the MFS/PAYE trick still works.

What If They Both Have Student Loans?

Get Student Loan Advice from an Expert

These student loan scenarios are complicated and being in a community property state might make your calculation more or less complicated than otherwise. If you need help running the numbers, spend an hour with an expert at StudentLoanAdvice.com, a White Coat Investor company. A few hundred dollars now may result in tens of thousands more dollars in forgiveness down the line. Don't be penny wise and pound foolish.

If you're not going to bother going for forgiveness, it's probably time to refinance those student loans. If you go through the links below, you'll get the exact same deal you would get going directly to the lenders plus several hundred dollars in cash back.

$250-$1299* †
Variable 1.90%-5.25% APR
Fixed 2.95%-7.63% APR
No
Refinance Now!
** White Coat Investor accepts advertising compensation from these companies.
† Bonus includes cash rebates and value of free course. Borrowers who refinance more than $100,000 in student loans using the WCI links will be enrolled in The White Coat Investor’s flagship course, Fire Your Financial Advisor for free ($799 value). Borrowers will still receive the amazing cash rebates that WCI has negotiated with each lender. Offer valid for loan applications submitted from May 1, 2021 through October 31, 2021. Free course must be claimed within 90 days of loan disbursement. To claim free course enrollment, visit https://www.whitecoatinvestor.com/RefiBonus.

What do you think? Are you in a community property state? Did it affect your student loan management decision? Why or why not? Comment below!