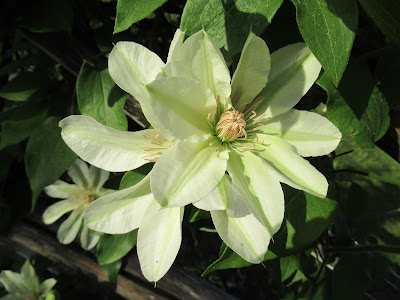 Clematis Candida
Cool mornings early in the week with a crescendo of warmth toward the weekend.
I began on Wednesday to prune and tie up the clematis. Duchess of Edinburgh which was the most affected by frost has benefited from the trim and the warmer days to put out encouraging new tendrils.
On Wednesday I drove to my favorite nursery, Homestead Gardens, in the South Fork community.
I came home with two dwarf nepetas--something I've been coveting, an assortment of bush type tomato plants, a lush hanging basket of mini-petunias as a gift for a friend, 5 assorted Gazanias for Gina.
Friday temps soared into the 80's F. We opened windows, worked at outside chores.
I moved over-wintered rosemarys from the crowded table in the sunroom to the south/east porch and began cleanup of the sunroom--sweeping up dropped needles and attacking numerous 'stink bugs' that seemed to literally come out of the woodwork around the south-facing windows.
The tomato plants I purchased were in the usual tiny plastic 4-packs and needed to be potted on. J. came home from getting milk at the Beachy's with 8 leggy 'Early Girl' tomatoes which also needed plonking in much deeper pots. He is itching to get things into the garden, but the soil is still damp and heavy. A frost in early May is not unheard of. The tomato plants will be much safer in my little greenhouse until the weather settles. 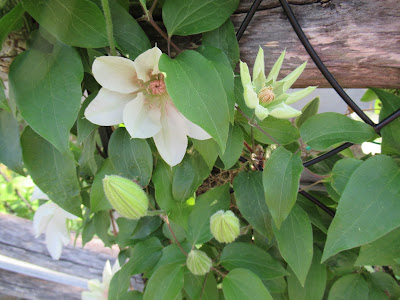 Candida, for all that she insists on blooming too early each spring is my favorite clematis, well worth the aggravation of shrouding in protective coverings during April's frosts.
During her too brief season of bloom I take photos nearly every day. 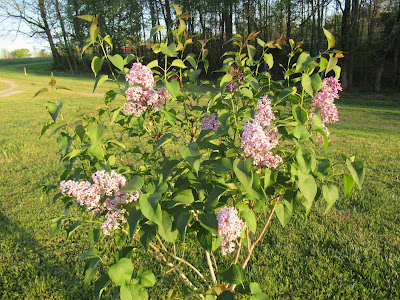 The lilacs are now in full bloom; their sweet scent carries me back to many decades of springtime in New England. I remember lilacs with gnarly trunks and branches reaching for the eaves of a farmhouse ell, unpruned, shaped by harsh winters and deep snows. Often lilacs remained to mark the site of a farmhouse no longer standing, victim of fire or long neglect.
I recall so vividly a certain afternoon in late May. My best friend Linda and I were strolling along the dirt road that stretched the two miles between her house and mine when at a bend in the road where no house stood, we caught the unmistakable scent of lilacs, Clambering over a rail fence we plodded through a hilly pasture and found the purple lilac in bloom near the tumbled fieldstones of an old foundation. 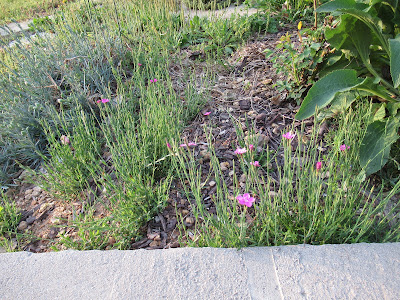 Pinks raised from seed in 2020 have settled in along the west retaining wall, spreading in sturdy clumps in spite of inhospitable soil.
Behind the pinks and the foxglove are the weeds which persist around the flat creek rocks laid as a walkway last spring.
It is very evident that I should have put down a weed barrier before arranging the stones.
My on-going battle with invasive and persistent weeds is not one that I am winning. 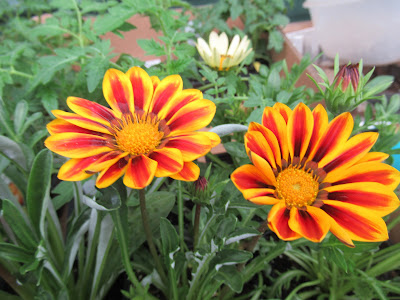 Gazania for Gina--they have gone home with her, given larger pots in which to grow a bit while she decides where to put them for the summer. 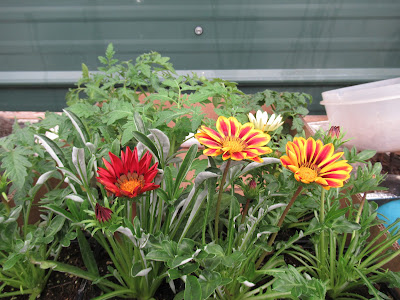 Time spent in my greenhouse, potting up, sowing seeds, time of contentment. 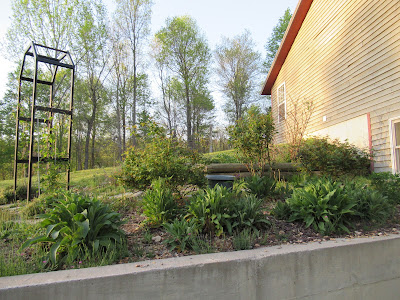 The west garden tonight at 8 p.m.--the weeds not too much in evidence in this photo.
I tied up both clematis to the trellis arch--Jackmanii and Dr. Ruppel.
The roses have been pruned as has the butterfly bush which was labeled as 'dwarf' but is obviously not of that designation. 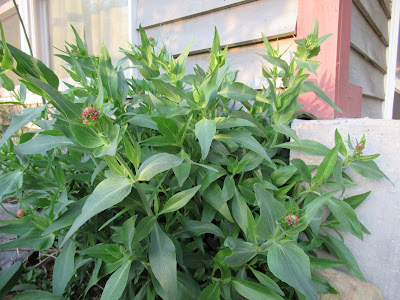 Centranthus Ruber/Red Valerian--a sturdy clump in the corner of the wall, has set some new plants which have invaded the space where miniature lilies are slowly multiplying. 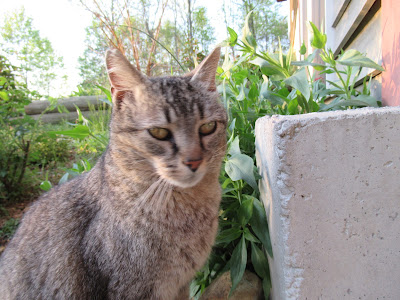 Willis still faithfully follows me about and oversees my gardening tasks. 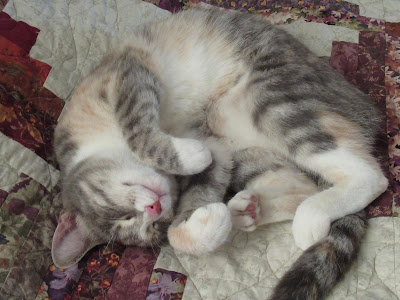 Shelby-cat whisked out the front door on Thursday morning, having spent the night in J's closet [she has a thing about closets and often has to be extracted.] I was surprised when she did not appear when the cats where called for their early afternoon 'tea,' nor did she show up while I unpegged laundry from the back porch lines.
I was really concerned that she did not respond to my calling, didn't come in for the night. Friday--no Shelby, ditto on Saturday. J. had seen a coyote crossing the lower end of the property earlier in the week. Shelby loves to prowl in the south ravine usually appearing from there when she is called. I struggled to accept the idea that she had likely met a sad end as a meal for the coyote.
Sunday forenoon when I opened the front door she shot in!
I scooped her up wondering if some lingering scent on her fur would suggest that she had been shut up in a house or barn--her coat smelled only of fresh spring air and green plants. Up a tree? Did she go up a tree in the ravine and forget how to climb down? Of course we won't ever know.
She gobbled a helping of tinned food, raced to J's chair in front of his TV, where she gave herself a thorough wash then curled herself in a heap on his bed where she stayed until evening. 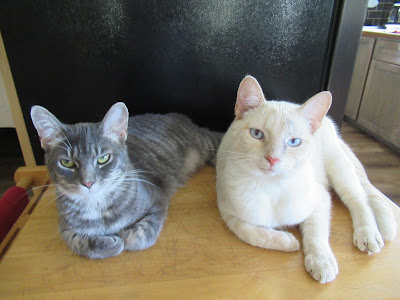 Elmo goes out and about although I have kept Rosie in the house.
Both have been enjoying the open doors into the sunroom and the east porch.
A female hummingbird [at least one] this weekend joined the males who arrived on the 13th.
When I am too exhausted to continue garden chores I retreat to the rocking chair on the porch with a book and a glass of iced tea. Rosie joins me to 'bird watch'--and has to be discouraged from leaping up the screen for a closer look at the hummers.
This morning was chilly--a mere 47F. which wasn't conducive to early morning coffee on the porch.
By noon the sky was blue, the sun shining but the wind was brisk.
I spent time in the greenhouse after our early supper, sowing seeds of basil, cosmos, rudbeckia and several varieties of coneflower. Two rows of beets and two of Swiss chard planted in one of the raised beds. Seed potatoes planted two weeks ago are not showing, but J. gently uncovered enough to determine that the spuds haven't rotted--merely waiting for warmer weather to push through the still cold soil.
I tied up clematis in the last golden light of the day, walked about contemplating the burden of work needed to tidy the perennial beds, hoping for a solution that will allow for flowers without the heavy work I can no longer do.
Surely I will find a way!
Share Share on Facebook Tweet Tweet on Twitter Pin it Pin on Pinterest
Back to News