A Field Trip in the Time of Coronavirus

by admin May 18, 2020
We found the best road trip to take during the pandemic!! Social distancing--check! Pretty close to home--check! Fun--double check! On the front page of our newspaper, along the bottom, ads had recently been run for Wild Florida Safari. Because we'd been to their airboat rides, and the super good small zoo, we felt confident that it would be a winner, and we were not disappointed. As a matter of fact, it was even better than we hoped. 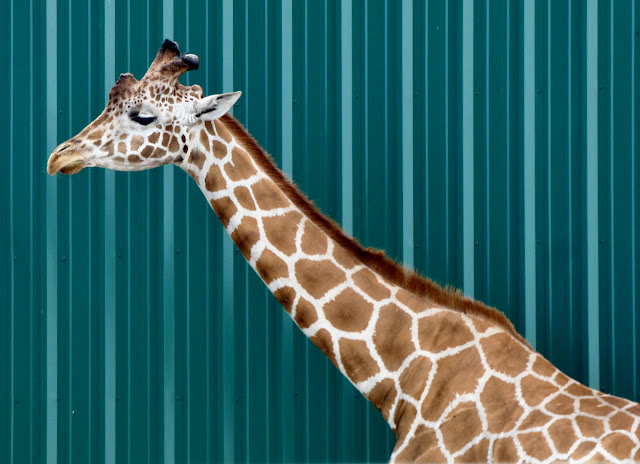 Yes, there were giraffes and loads of other grazing animals with crazy horns, as in so many of them have crazy horns! 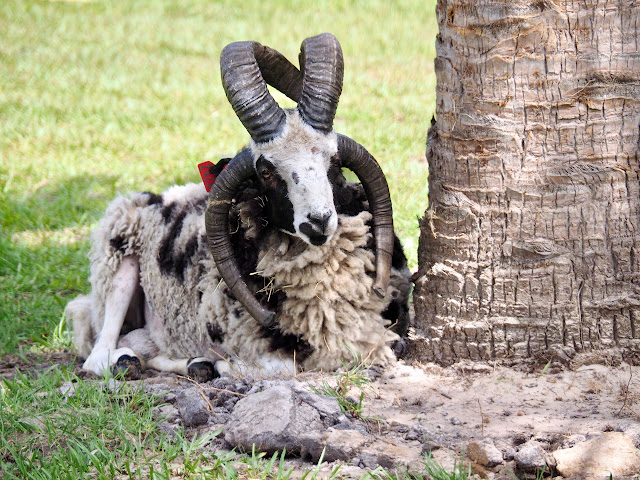 I booked online, then made a sign to hold up when we got to the gates with our name, so all we had to do was drive through the gates. Immediately we knew we'd come to the right place! 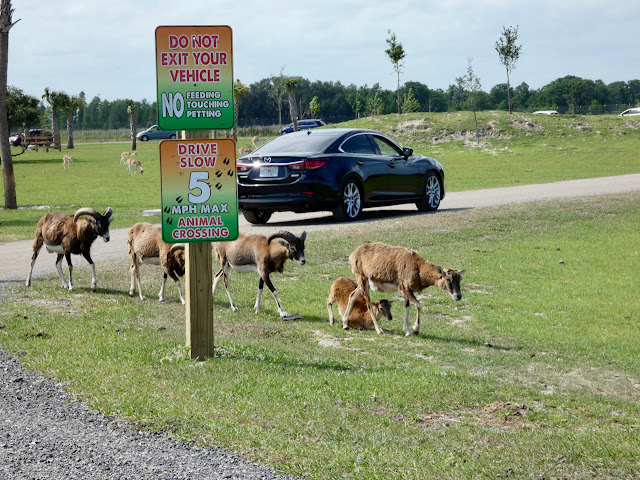 There was only one tiny problem as far as this photographer was concerned...most of the animal activity was on Bruce's side of the car, so every now and again, he moved his arm in front of the camera I had pointed out his window! 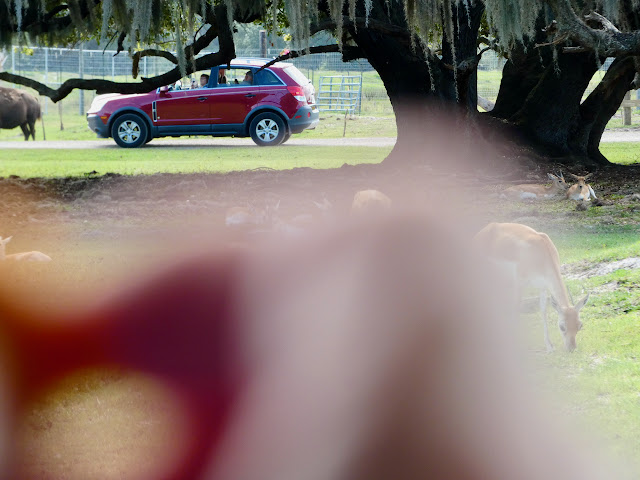 Behind his arm there are loads of super cute deer like creatures. Some animals ventured into the road, slowing the already slow line of traffic. 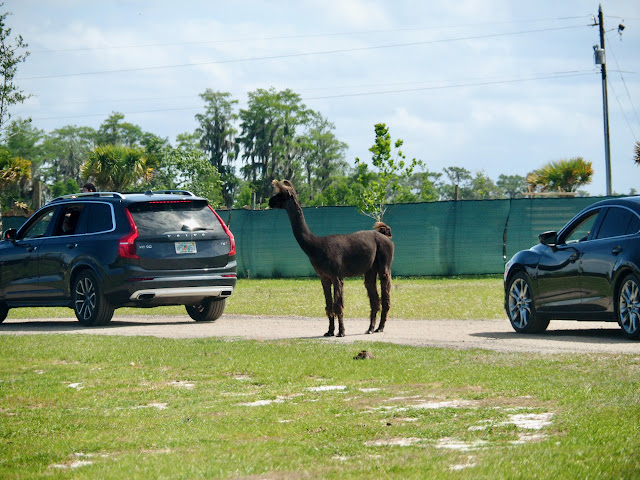 And some came right up to the window as was the case with one of the llamas that poked his head nearly inside our car. You should have seen my face when he came right at me!

Let's take a look at a few of the horn styles, if you will. 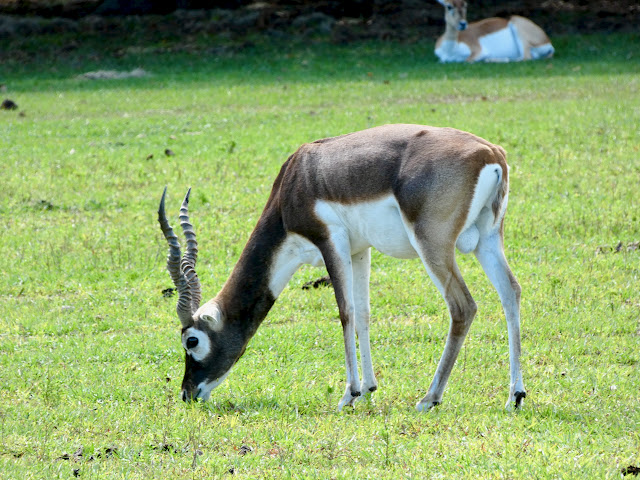 I would tell you what each animal was if I knew, but because we had no contact, we failed to pick up the identification sheet. 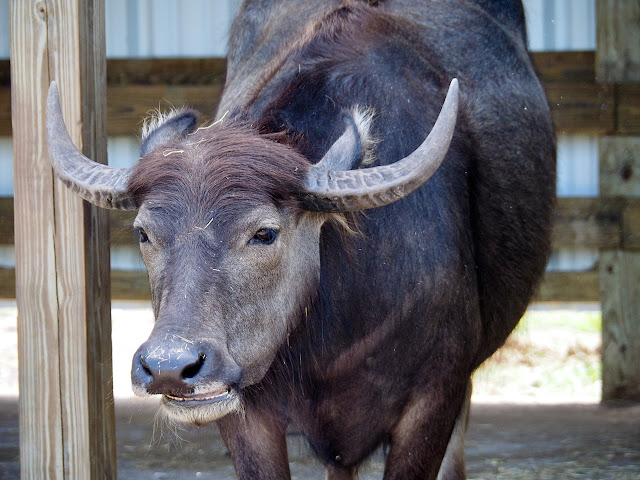 It was super exciting seeing Buffalo up close because although they are prolific in Yellowstone, we saw but one while we were there. So, here were were, inching closer and guess what? 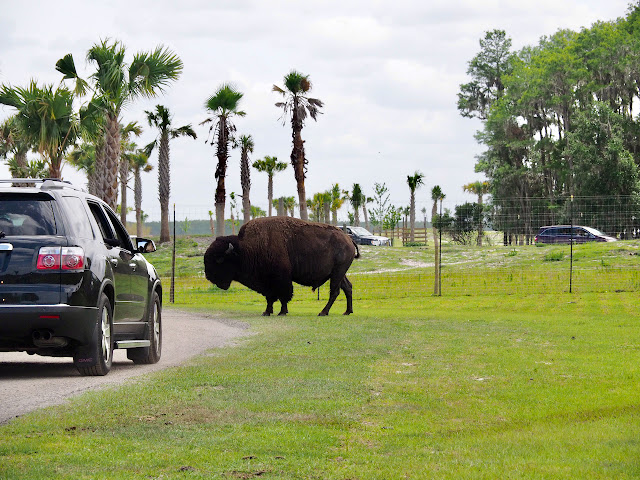 The buffalo turned around, ambling off and showing his backside. Eventually, on our second trip around, one came close enough to get a decent photograph. 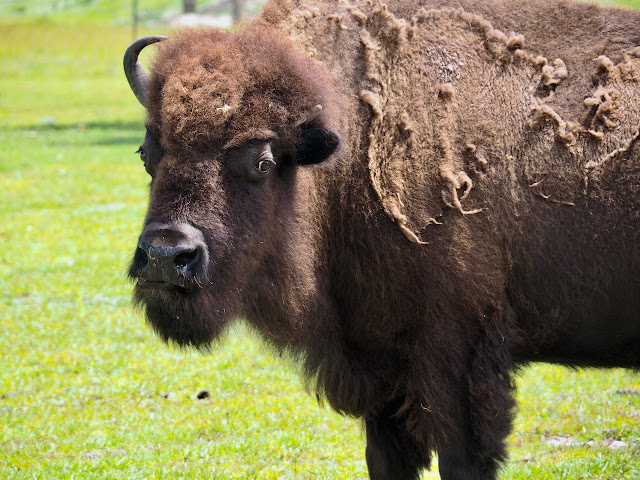 That shaggy fur is really interesting and I'm going to look it up right this minute and find out what it means. Okay, from what I can tell it is shedding the winter coat which, believe you me, they will not need here in sunny, hot Florida. The good thing about this place is it is big with lots of area to roam. 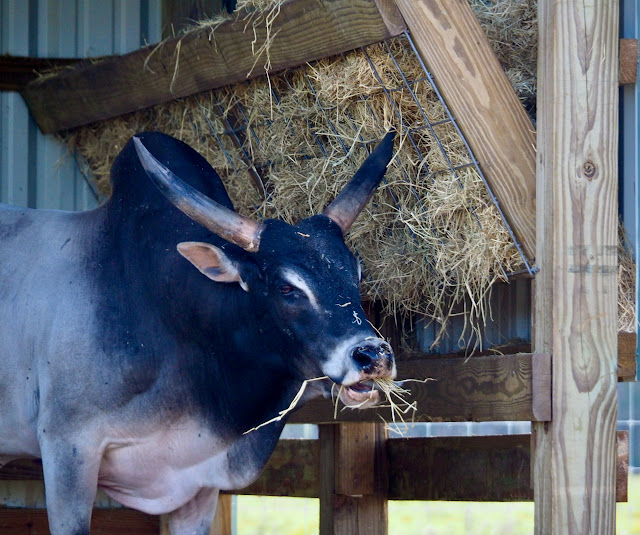 You could see that lots of folks brought their children who I presume they are home schooling right now, maybe considering this a field trip like we did. We were stopped at one point and here's the reason why. All of a sudden, of course on Bruce's side of the car, there was a bit of an impromptu animal parade. 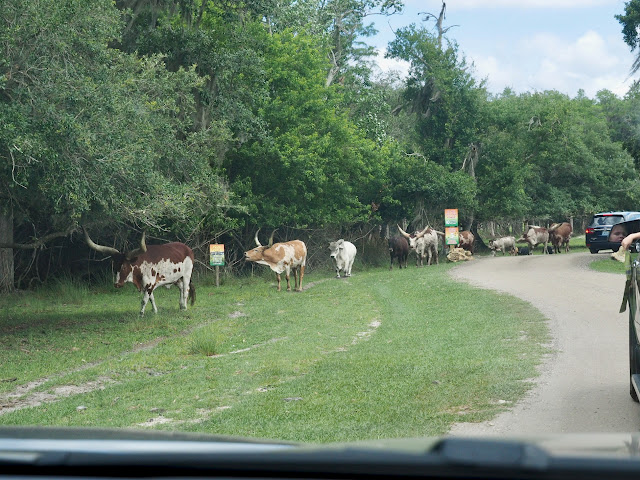 The little girl in the car ahead of us got so excited she dropped her brochure out the window. That was one thing Bruce mentioned, he loved hearing all of the children squealing with delight. 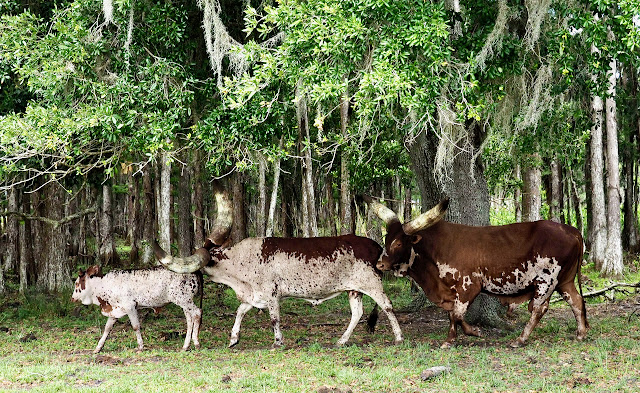 How do they do it with those gigantic horns? Along with the cattle, a very hairy pig(!) was part of the parade cast. 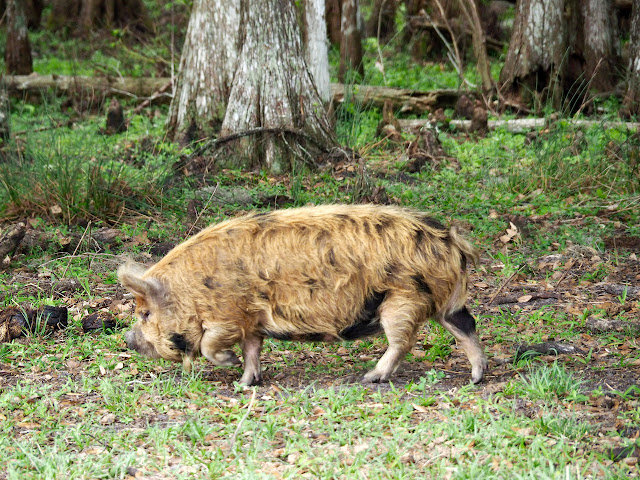 As I mentioned, we went around twice which we thought was such a great feature. You exit into either the parking lot, or there is a sign to direct you right back in again. Presumably you could do it all day if you had a mind to. Around the next corner, well there was a camel munching on some tree leaves. 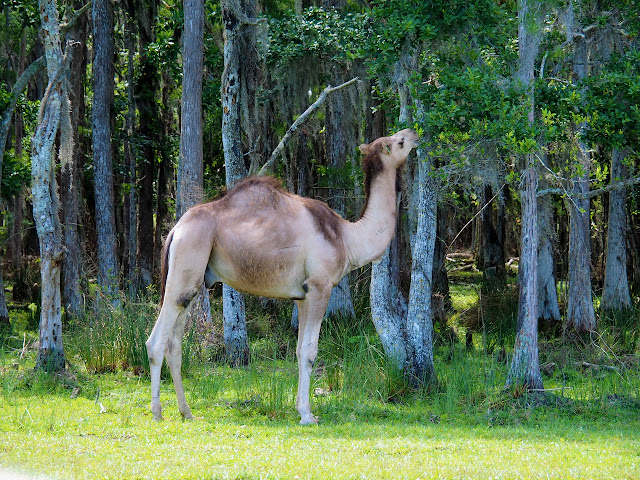 As well, there were loads of deer and Elk in the woods behind the camel. And more horned mammals! 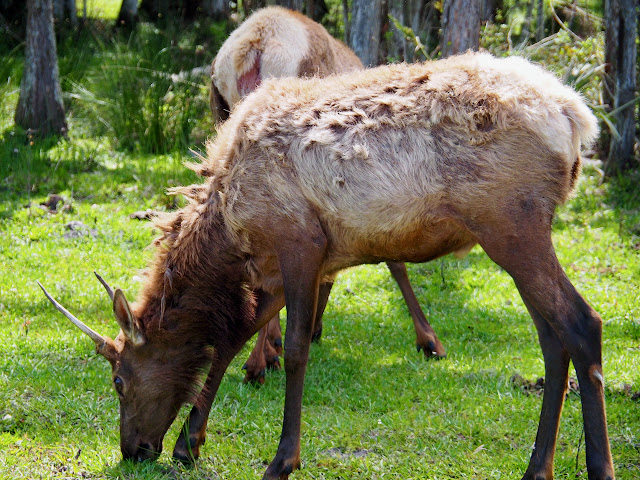 The next time we go, I will either sit in the back seat behind Bruce, or stick my body out of the sunroom like loads of others were doing. 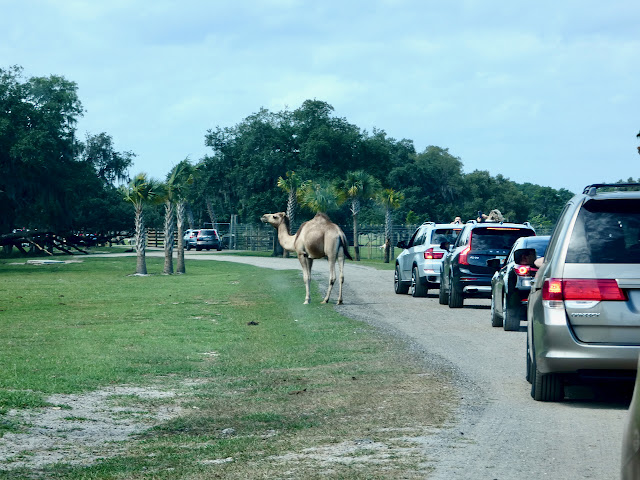 This llama did not try to nose his way into our car. 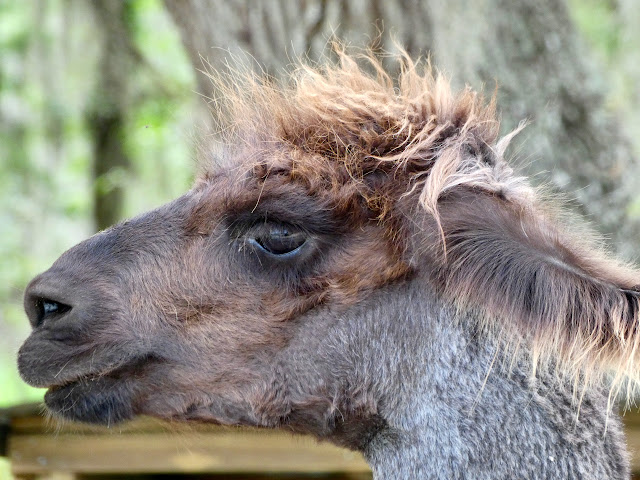 Just before you exit, there is the giraffe feeding area that is shared with beautiful ZEBRAS, none of which I was able to photograph well enough to share. 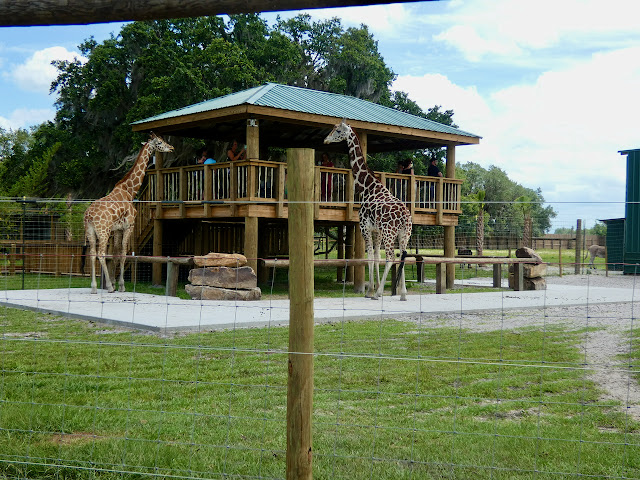 How fun was that little trip? It was very fun in person that's for certain and we plan on returning, especially when the kids are back in school and their poor parents aren't looking for ways to keep them occupied!

On the bird front, it won't surprise you that there is something exciting going on around these parts, in the form of a Red Bellied Woodpecker nest. Not that I've seen the nest, but I observed said bird returning to a tree out back that I'd previously noted had a perfect hole. At the time I wondered about it, but there was no action prior to this past week. Now, the parents are back and forth feeding all of the time. So far, I've seen no little ones, but you can bet your bottom dollar I will keep watching! This is the Mom before exiting on another food run. 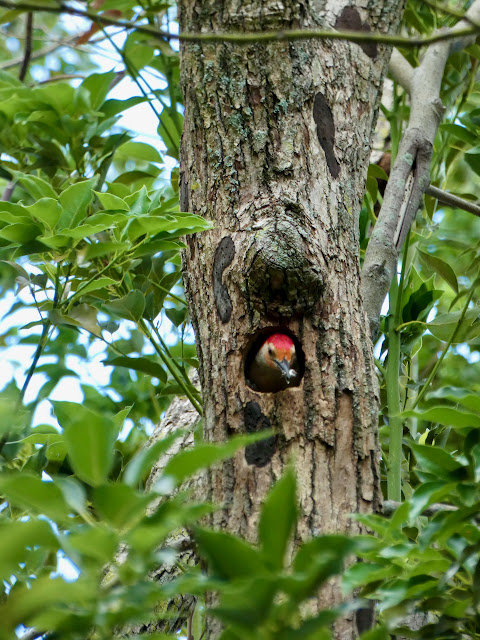 From the looks of things, they've used this tree before, apparently the norm.
So, today is Bruce's birthday and like everyone else during this time, it is slightly unusual. As I type, he has gone to get his birthday present at Lowes in the form of a new porch rug. Don't laugh! He loves sitting on the porch and thought the one we had was looking weary, so it will end up making him very happy even though it sounds unconventional. It was meant to rain, but so far not much has happened. Furthermore, adding to the birthday fun, we went to Costco, the first time in months. We ended up buying all kinds of good eats for him rather than go out. Masks are required there, turning some folks away at the door who were unprepared for the new rules. While there were shoppers, not too many that we felt uncomfortable. And no, they did not have any toilet paper. We still have some rolls, so for now we are good. Also for the first time in I cannot remember how long, I filled my car with gas and was it every cheap. I think it would be safe to say that NO ONE ever expected gas to be $1.59 gallon again in their lifetime. Well, it is.
I also had my teeth cleaned today. Hesitant at first, I just decided to go with it because Karen wears a serious mask and well, it's been so long! With all of the conflicting information, it's darn hard for us to know what to do. Or, that's what it feels like to me.
Well, Happy Birthday to my darling husband who has returned and is chatting with Jonathan, after spending some time with David late this afternoon. He's the best! 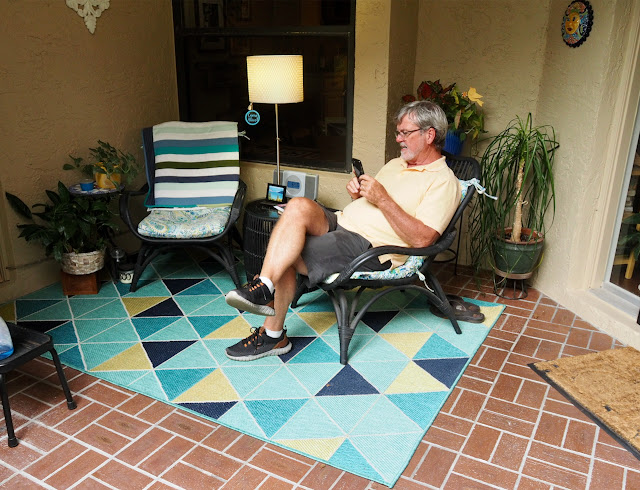