What will high school sports look like this fall? All road games for some, fewer fans for others 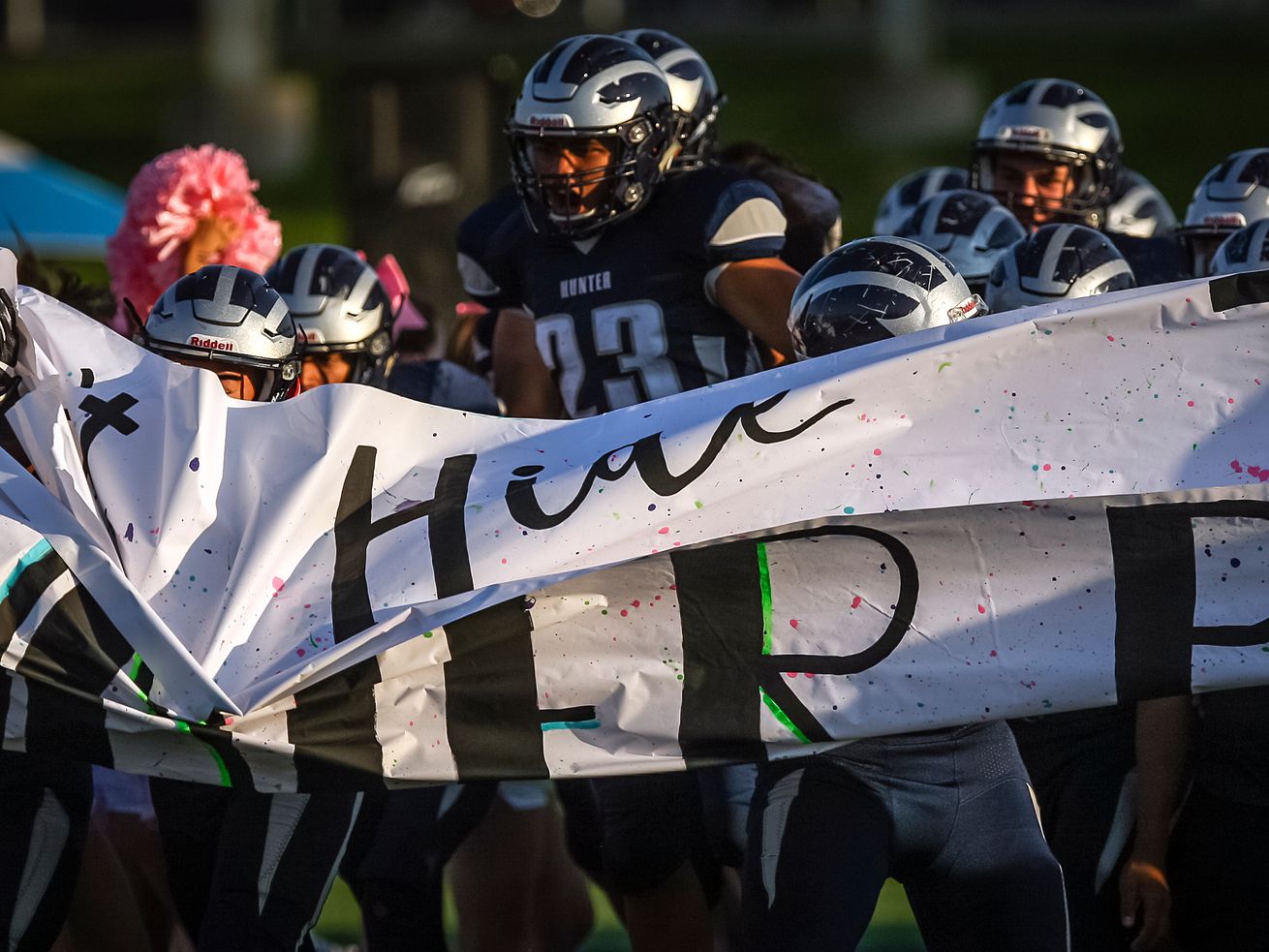 The Hunter Wolverines host the Pine View Panthers in West Valley City in this Aug. 31, 2018, file photo. | Adam Fondren, for the Deseret News

MIDVALE — High school students will be allowed to play sports this fall, but what that looks like depends on where they live.

After Gov. Gary Herbert tweaked what is allowed under his orange or moderate-risk guidelines, the five high schools in Salt Lake City — West, East, Highland, Judge Memorial and Rowland Hall — will all be allowed to participate in athletics, even if the schools opt not to approve in-person classes.

Judge and Rowland Hall are private schools, while the other three will have their fate determined by the Salt Lake City School District in the next couple of weeks.

Brighton High Principal Tom Sherwood, who is also on the board of trustees of the Utah High School Activities Association, said principals from across the Wasatch Front — including Davis, Salt Lake, Canyons, Granite, Jordan and Alpine districts — have been meeting for the last couple of weeks to try and create schedules that will allow those schools to compete in both region and nonregion games without hosting any games at Salt Lake City schools.

“As part of the orange phase, it was agreed that they would not have spectators,” Sherwood said. “But if they’re scheduled to play, you know, Brighton at Highland, ... I’d rather they play the game at Brighton, and that way, their fans can still come, in a limited number, but they can still attend. And we’re looking at doing that for other fall sports in the Salt Lake districts as well, where they are not probably going to have fans in their buildings. They’re looking to play most of their contests away.”

Sherwood said his district will require every person attending a game — whether it’s junior varsity soccer or varsity football — to have a ticket. The schools will only allow 25% of their capacity, even in outdoor stadiums. Some events will cost money, but others will not, and he said they will livestream every contest they can, but that’s dependent on internet availability.

“And in an effort to do that,” he said, “it will severely reduce the amount of fans present in events that will allow for spacing and allow for much easier mask policing because we’re reducing the spectators.”

He said his district, as well as some of the others, will revisit this decision around Labor Day to see if they can allow more fans or if they should discontinue allowing fans to attend, as professional athletics teams have done.

When Alpine School District Superintendent Sam Jarman asked the group to discuss why fans should be allowed to watch high school sporting events when professional teams are not allowing fans, Sherwood was among those who defended the decision. With the athletes being minors, he said it is important that parents and families be part of the student athlete’s experience.

Washington County School Superintendent Larry Bergeson said his schools have received a lot of calls from Nevada families asking about the possibility of transferring to Utah schools for in-person classes, as well as the opportunity to participate in sports.

“We are being hit pretty hard from calls from Vegas,” Bergeson said, noting they’ve been clear with those who’ve called on the strict rules that don’t guarantee athletic eligibility. “We’re holding firm on it, and we are being hit really hard from the Vegas and Mesquite area.”

In anticipation of some of these requests, Utah High School Activities Association assistant director Brenan Jackson, who oversees football, said they’d made some clarifications in transfer guidelines that require out-of-state families to meet the very narrow exceptions that allow for a transfer, one of which is a full family move. The family must provide proof of a terminated lease or the sale of a residence, along with proof of a new rental or purchase in a school’s boundaries before a student athlete would be eligible to compete.

Transfers may become a big issue for the association, as Utah has schools in three different situations. Nine counties are in the least restrictive green or “new normal” risk phase, while the rest are in yellow or low-risk phase, except Salt Lake City, which remains in the orange phase.

Rob Cuff, executive director of the association, reminded board members that if a school chooses not to play athletics, for reasons related to the pandemic, students would not be eligible to transfer to Utah schools — in state or out of state.

Sherwood said he has faculty members who are bringing their students to school with them because they want them to have the opportunity to attend classes.

“The online instruction is not as good,” Sherwood said. “It’s not their fault that they can’t provide in-person learning, but ... I don’t know where I’d fall on that right now. It’s a tough call.

“I believe we are seeing some of the academic transfers ... from Salt Lake District. The topic of sports hasn’t come up yet but people are moving districts to seek in-person instruction.”

State School Board member Laura Belnap acknowledged that everyone involved in these discussions wants high school students to have every opportunity to compete this fall, but she wants to make sure safety is the guiding principle in discussions and decisions.

“I just want to make sure we continually think about what is our safest approach is, and sometimes it might be to not play the game,” Belnap said.

Many schools, like those in Emery School District, are almost back to normal. Steve Gordon, principal at Emery High, said they held a yearbook signing event on the football field that was attended by 500 students. They didn’t require masks or social distancing, although the local health authorities recommended the school give students their own pens so they didn’t share with each other.

Specific outbreaks or positive cases will be handled by the health departments. In some cases, principals reported that only a single student was sent home or quarantined, while others imposed a 14-day quarantine on an entire team. It always depended on the specific circumstance of how the COVID-19-positive student became exposed and then who they may have exposed.

All of those involved acknowledged that there will be questions that arise. Will schools from green zones want to travel to schools in orange or yellow zones? At what point do schools allow students to attend games and under what restrictions? How will schools handle travel?

In one case, Bergeson said a Washington County school was informed by a Cache County school that the district had mandated no overnight travel, so they had to cancel a football game. Instead, Bergeson got involved and they were attempting to find a venue in Utah County where they could play the Aug. 14 game. Jarman said he’d help them find a field at one of Alpine’s schools.

It was a similar cooperative spirit exhibited by Granite, Canyons and Jordan principals in trying to help Salt Lake District come up with options that would encourage the school board to support some type of season for those students athletes.

July is usually the month when high school administrators take vacations, Sherwood said. But this year, every principal he knows is preparing teachers, staff and coaches for a return to school under sometimes shifting pandemic guidelines.

“I’ve spoke with a lot of my principal colleagues and, and none of us want to be the guy that hosted a football game where there was an outbreak,” Sherwood said. “We want to be careful but also allow for some local control and be safe. But you know, we probably need to play because it is in the kids’ best interest to play. I think it is in the community’s best interest to return to some normalcy, if we can try to manage it appropriately.”

He said coaches are doing everything they’re asked because they’re desperate to give the teens a chance to compete.

“I had a meeting with my coaches and I said, ‘Listen, we’re in it for the participation this year of boys and girls. It’s not about the championship this year. We don’t even know if there’s going to be championship games,’” Sherwood said. “Our motivation for participation in sports this year is is as pure as it could be, that is ... let’s get the kids the ability to participate. Let’s make sure we’re behaving in a responsible way. If you need to sit kids, you sit kids. If you need to cancel a game, you cancel a game. We need to be responsible stewards of what they’re allowing us to do.”

Here is a complete list of guidelines that will govern Utah’s return to high school sports: uhsaa.org/news/uploads/UHSAA%20Return%20to%20Play%20Document.pdf.