What is Ken Jennings up to after his big ‘Jeopardy!’ victory? 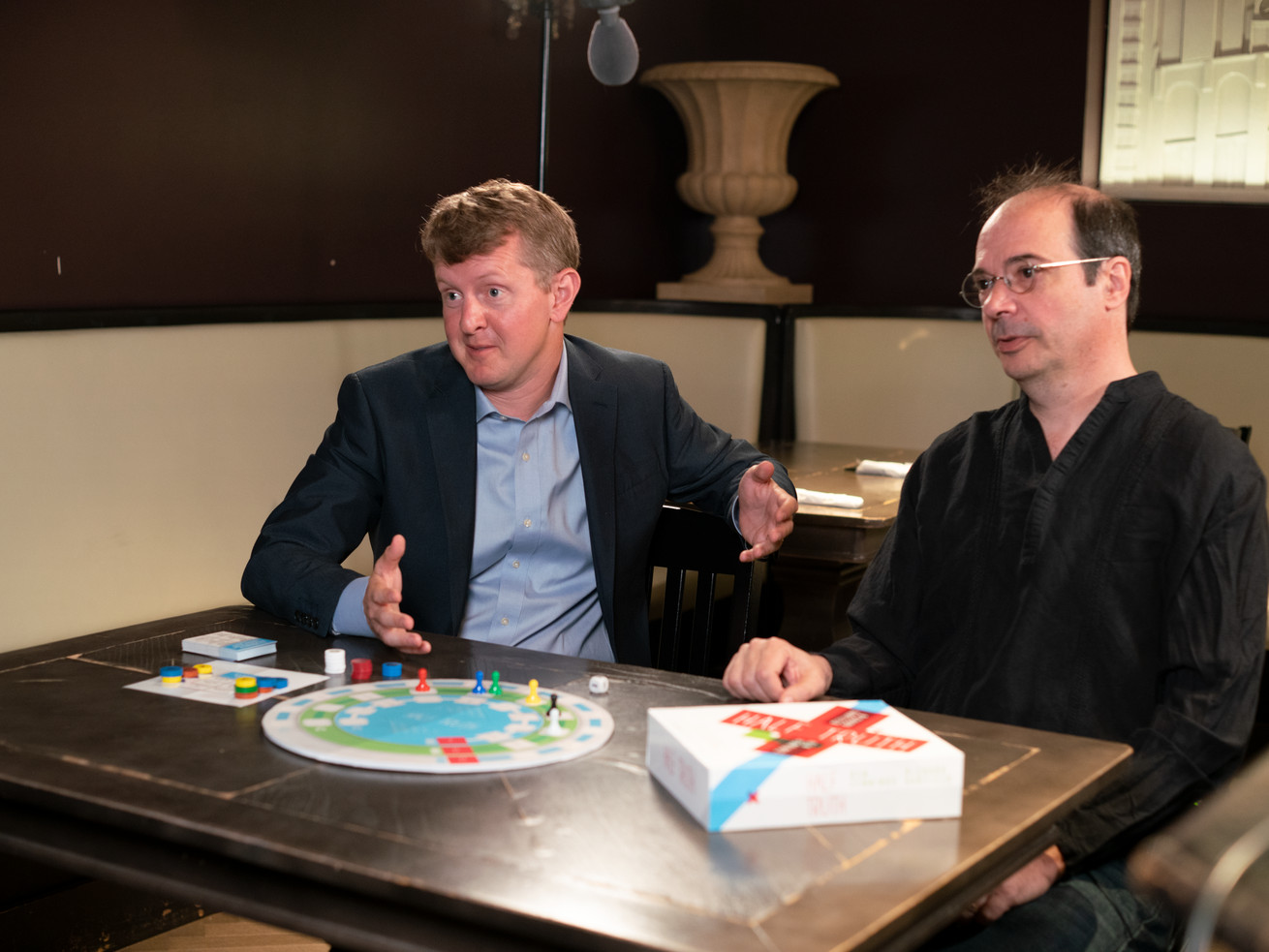 Ken Jennings (left) and Richard Garfield are the creators of the trivia board game Half Truth, which hits shelves May 6. | Provided by Motiv PR

Called Half Truth, Ken Jennings’ new board game hits stores May 6. And Jennings is going all in on promotion: ‘If you play Half Truth, you will win a million dollars on ‘Jeopardy!’ he said.

Editor’s note: This is the second story in a two-part series about Ken Jennings. Part 1 explored Jennings’ victory in the “Jeopardy! The Greatest of All Time” tournament.

During the summer of 1984, when Trivial Pursuit was all the rage, a 10-year-old Ken Jennings had a major revelation — one that would lead to some of the biggest moments in his life.

“Knowing a fact that maybe even Mom or Dad didn’t know — that’s a real sense of power,” Jennings told the Deseret News. “That can go to a kid’s head.”

Being in the know electrified Jennings. His family played the quintessential trivia game often that summer, either in the living room at home or around the grandparents’ dining room table.

“That was really formative for me,” he said.

During a four-night “Jeopardy!” tournament that aired in January, Jennings answered 179 of 192 questions correctly. More than 13 million people watched Jennings win $1 million and sit on the shoulders of “Jeopardy!” giants James Holzhauer and Brad Rutter, hoisting a “Greatest of All Time” trophy high in the air.

Where does one go from there?

Well, back home, for starters.

Jennings has worked from home as a writer since his initial 74-game winning streak on “Jeopardy!” in 2004. Amid the coronavirus pandemic, though, he’s getting more time with his two teenagers than usual. A regular part of his workflow now involves making sure his kids aren’t playing “Animal Crossing” or “Fortnite” when they’re supposed to be doing home learning.

From his Seattle home, Jennings has also been wrapping up a project that’s been a decade in the making — a new trivia board game that turns Trivial Pursuit, the formative game he loved so much as a child, on its head.

The game, called Half Truth, hits stores May 6. And Jennings is going all in on promotion: “If you play Half Truth, you will win a million dollars on ‘Jeopardy!’”

As Jennings tells it, game designer Richard Garfield (“Magic: The Gathering”) recruited him “Nick Fury-style” to help revolutionize the way trivia is played.

The first email came in 2009. Jennings, who is a big fan of Garfield, thought it was a prank. But soon after, Jennings’ family was sitting around Garfield’s kitchen table playing a prototype of the game.

He lost the second time around.

“I remember thinking, ‘That’s probably even better,” Jennings said. “Because it means that a strong trivia player will maybe have a leg up in this game, but it’s not going to be your annoying brother-in-law who wins every time.”

From there, Jennings went on to develop new trivia for the game. With Half Truth, the creators had a few objectives in mind.

The biggest goal: They wanted their game to be more inclusive.

“In Trivial Pursuit, if you’ve never heard of the subject, you’re really not going to be able to play. You’re just going to feel dumb,” Jennings said. “Half Truth is more of a party game, a family game. It’s not just for hard-core trivia nerds who love spouting facts.”

Jennings hopes Half Truth’s inclusiveness will allow more people to discover the thrill of trivia — something he hasn’t been able to shake since the summer of 1984.

“It’s a great feeling when something in your head, in your brain, turns out to be useful in real life,” he said. “That’s what we’re chasing.”

Everybody plays on every question in Half Truth. And if you don’t know anything about the category, you’re not completely left in the dark: Each card comes with six answers — three are right.

You don’t have to guess all three to advance on the board, but your answer has to be 100% correct. So many times, betting on just one can be the best move (this Deseret News reporter, who knows nothing about “Hunger Games,” advanced on the board for a guess that correctly identified one of the “Hunger Games” districts).

But that doesn’t mean the questions are easy.

The game features 500 to 600 questions that Jennings has carefully crafted and edited over the years. For example, one tricky card asks the players to guess the movies that are over three hours long.

“There’s an attempt on each card to include some answers that are obviously right, maybe some that are more obviously wrong and then a few that are right on the edge,” Jennings said. “Each card is kind of a bell curve where you can spot the easy truth or the easy lie. … But there’s a bonus for players who can figure out the edge cases.”

To mix things up, one symbol on the game dice calls for players to identify the wrong answers. Sometimes, the wrong answers on a card will follow a pattern or have something in common, Jennings said.

“It’s not just a question. It’s kind of a little puzzle,” he said. “On every card, players are trying to outsmart me and Richard, and see if they can see through our deception.”

The game categories run the gamut — from Nancy Drew to Crayola to gardening to dog breeds to root beer to fictional breakfast cereals. Jennings said his kids helped out with Pokemon Go-related material, and his wife came to his aid for a “Great British Bake Off” question.

“Not all questions are created equal — some are more fun than others,” he said. “But whatever you’re into, there’s probably a card about it. With hundreds of cards in this box being written by the same person, you don’t want them all to sound like me and have my biases. You want it to be like the whole spectrum of human thought.”

Aside from the design, Half Truth hasn’t changed much since its inception in 2009 — although then it was called Inconceivable! But as time passed, the trivia evolved and Jennings had to update questions regarding Super Bowls and “Saturday Night Live” hosts, among other topics.

“It’s been a long 10 years of finding a publisher, trying to convince the publisher to actually release the game and then switching over to Kickstarter when the publisher didn’t seem too enthusiastic about the game,” Jennings said with a laugh.

The game’s creators moved to a Kickstarter campaign in 2019. They sought to raise $10,000. Within three hours, the game was completely funded.

“People started to get really excited and build a community around this game that didn’t even exist yet,” Jennings said. “We didn’t have pieces and stuff, and people were so enthusiastic about it, and that was contagious. We were kind of inspired by that.”

Now, the game’s big debut is almost here. Starting May 6, Half Truth will be available at Studio71Games.com and retailers including Target, Walmart and Amazon.

Jennings reiterates that you don’t have to be a trivia pro to win “Half Truth.” You don’t even have to know all of the correct answers on a card to win (this Deseret News reporter beat her husband 28-26 and never even bet on all three answers).

By providing the potential answers up front, the game becomes more accessible to players of all ages. And it means the game doesn’t get paused for 10 minutes while a player struggles to think of an answer, Jennings said.

Lately, amid the pandemic, Jennings said his wife’s family has been playing board games together via Zoom. Soon, they plan to give Half Truth a whirl. Based on his kids’ reaction to the game over the years, Jennings is excited for that moment.

“I think this is perfect, because it’ll play really well,” he said. “Also, I wrote all the clues, so I’m gonna have to miss the call with the in-laws.”