How To Host A Family Reunion

by admin June 18, 2020
At the beginning of the week we all piled into the car and headed up to Idaho. This was the first year that Derek's immediate family hosted a family reunion, and I'm pretty sure it's something that we're going to repeat each summer. It was honestly so much fun and it was such a great way to be able to get the entire family together, have fun, and not spend 10,000 years cleaning up Derek's parents house afterwards. I've had a lot of people ask for details about the reunion, so I'll share as much as I know! 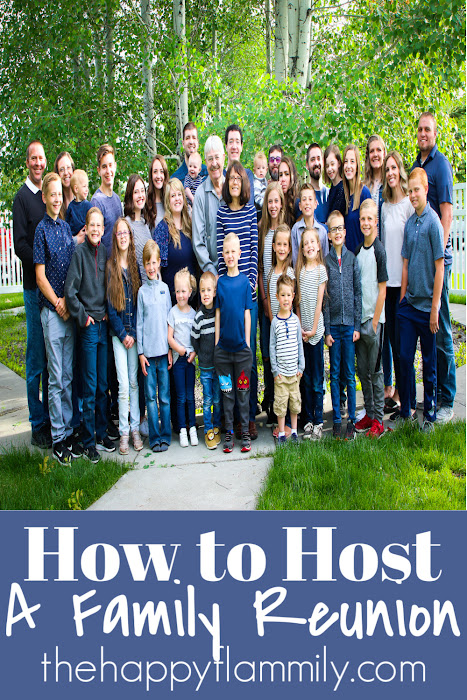 I do want to start off by saying Derek's sister planned this first reunion and did an amazing job. I think the plan is for it to rotate among Derek's family who plans it in subsequent years and Keriana honestly did such a fabulous job this year that it really made an awesome blue print for us moving forward.
Where to host a family reunion?
We did ours in Driggs, ID. This was a one hour drive from Derek's parents house, and a 4-5 hour drive for us from Utah. Most of Derek's siblings all live in the same town as his parents, or the next town over. Most people had a short dive except for Derek and I, and his sister who lives in Pocatello. 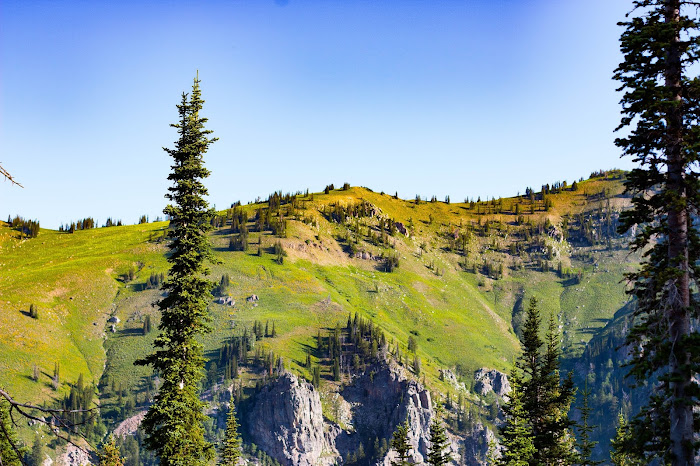 If you're planning a reunion, picking a place that is within a good driving distance for most families is ideal. I think we originally picked Driggs because it was a short driving distance to Yellowstone National Park, which I think originally we were going to go to, but with covid-19 I think the entrance was closed so we wound up doing other activities instead, but it wound up being just as fun.
Try picking a location that has a huge focal point such as a lake, a national park, or some sort of key highlight, and then it will make it easier to plan activities around that. Then look for places that are big enough to host all of you. I think we found our place on Air BNB, so look on home rental sites like that to see what you can find. We wound up having enough space for each family to use two bedrooms.
Who to invite to a family reunion?
Honestly, you can make it as big or small as you would like. Derek has a large family (his parents have 9 kids, and there are 20 grandchildren so far), all together there was 36 people. It might have been a little unreasonable to plan an event for anyone outside of the children, spouse, grandchildren circle, but if you have a smaller family you could totally include extended family to make it more inclusive.
How to plan meals for a family reunion?
Each of the married spouses and Derek's parents took turns rotating through the meals. Derek's sister and her husband were in charge of dinner the first night, and then his other sister and her husband cooked breakfast the next morning, Jacob and Krista were in charge of lunch on Monday, and Maurcine and Dakota were in charge of Monday dinner. Derek's mom and dad were in charge of breakfast on Tuesday, and Derek and I were in charge of Tuesday lunch. This made it really easy for delegating responsibility and knowing what to bring. We all brought additional snacks and pretty much shared those in between meals for kids when they were hungry. 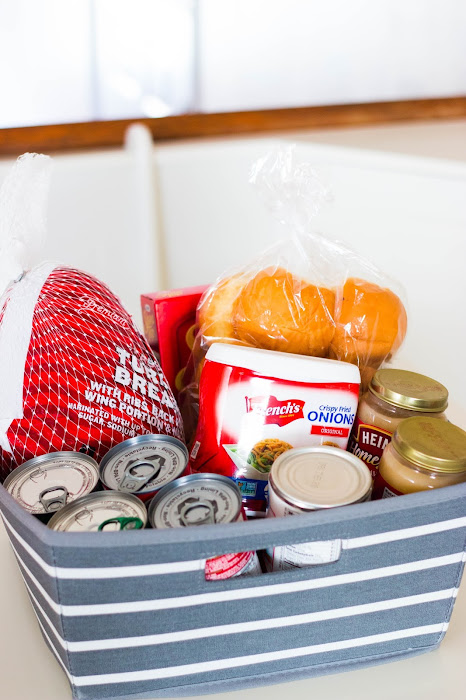 How to divide expenses for a family reunion?
This was a question someone sent me on Instagram and I'm not really sure the exact answer. Everyone who was in charge of cooking a meal purchased all the food and supplies for that meal. I believe all the married couples and Derek's parents spilt the cost of where we stayed six ways (there might have been others who did contribute but I'm just guessing). Most of the activities that we did didn't cost anything (aside from some prizes and candy and things like that, and I assume Derek's sister paid for those so thank you Keriana if you're reading this!). One night the entire family went horseback riding for two hours and I'm sure there was a fee for that, I'm assuming paid for by Derek's parents.
What activities to do at a family reunion?
I'll share the full schedule we used for the reunion at the bottom of this post but here is an extensive list of all the activities we did at the reunion: 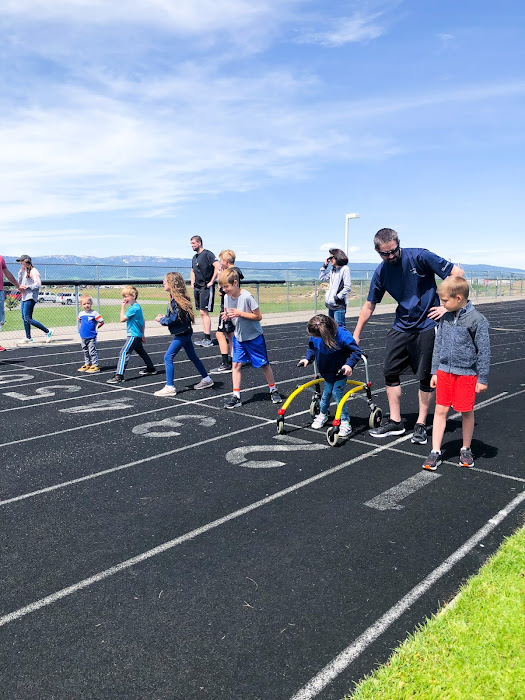 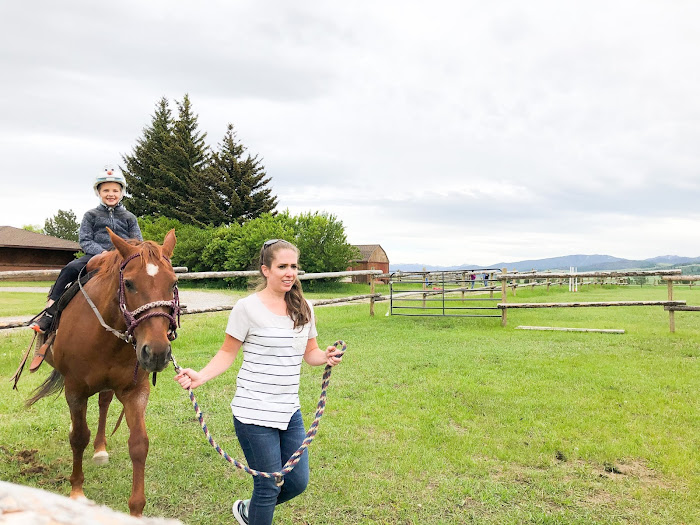 What to do during down time in a family reunion?
We had lots of downtime at night after dinner, and during the afternoon between lunch and dinner on the second day. Where we stayed had a big yard, a hot tub, TV for movies, and we brought lots of board games. During the downtime everyone kind of did their own thing and it was really nice. Most of the kids all played really well together, I got a nap at one point, and a lot of the adults played board games, cards, or just simply talked. It was really chill and didn't feel like it needed to be planned or overly scheduled.
How to keep everyone on schedule at a family reunion?
Derek's sister wrote an itinerary and had it hanging up on a lot of the walls where we were staying, and sent it to everyone a week or so before we got there. Everyone knew what to expect and what time all the meals were happening, and when we had to be in certain places for horse riding and major activities like that. Did we stick to the schedule perfectly down to the second? No, but we stuck to it pretty well and it was just really nice for everyone to be on the same page about when certain things were happening so we had general idea for what to expect. 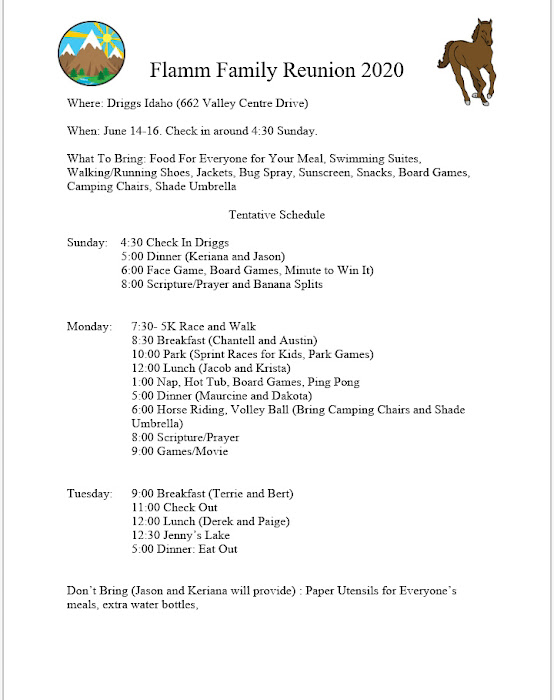 Family Reunion Awards:
Derek's sister made medals for all of the nieces and nephews out of canning lids and ribbon that said "Flamm Reunion 2020" on them and were super cute. She also bought 1st, 2nd, and 3rd place medals for each of the running events that were held, and ribbons for other things like best chef, the freeze dance competition, and other fun little games. She also gave gift cards along with some of the awards as well which was super fun. Derek's family is really into Boggle and they even bought a trophy that will travel to all future reunions and get engraved with the Boggle campion's name on it for that year.

This is pretty much all the information I have on how to organize and plan a family reunion. If you have any tips or suggestions that have worked well for you, I'd love to know about it in the comments below!