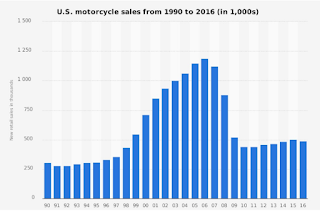 The article accompanying this graphic claims "the sky is not falling" - sort of looks like it to me!
That being said, overall motorcycle sales have dropped and pretty much leveled-off since the recession of 2008.  Perhaps a big part of this is economics.   People just can't afford to drop 20 grand on what is essentially a toy.   Yes, one "commenter" on YouTube claims he puts chains on the tires of his Harley and rides it through foot-deep snowdrifts in Minnesota in January.  Even if he is telling the truth (I doubt it) most of us prefer heated seats and a heated steering wheel and even 4wd in weather like that.   The motorcycle, on the other hand, is a fair weather friend and sits parked for six months of the year in most places other than San Diego.
But part of it is fear.   Economic fear - fear of running out of money - and personal fear of being hurt. You visit enough friends in the hospital or go to a few funerals - as I have - and you realize that motorcycling is still ten times as dangerous as riding in a car, even if people "watch out for motorcycles".   Besides, for less than the cost of a Harley, you can buy a nice convertible and put the top down and they don't even make you wear a helmet.    I've had bikes (four) and convertibles (six) and hands-down, the more fun and relaxing way to ride with "the wind in your hair" was in a ragtop.  On the bike, well, most of the time, you have your head in a bucket (or should) and it just isn't all that much fun.
People are more introspective today - they are "cocooning" as Faith Popcorn predicted - staying home in their "caves" and experiencing reality through the Internet in an online game, or through Netflix on their wall-screen television.  The "lockdown" wasn't much of a burden for many of those folks.  Given that background, you wonder why people aren't going out and buying boats and motorcycles?  Big SUVs sales took off (its like driving your car while never leaving home) and even RV sales took off - until recently.   An RV is literally driving your home on wheels - it is cocooning in motion.
I think this insular level of comfort may be responsible for overall sales declines in recreational gear, but that's just my theory.
The CEO of Harley was booted out - his electric motorcycle and other projects designed to attract the "next generation" of riders apparently will go with him. The company is concentrating on its core products, including the "trikes" I mentioned in my previous posting, which are apparently quite popular, but the author of the above video derides as "over-sized mobility scooters" (if you see the riders, you'll get the jibe).
There is a market for those, as well as the hard-core Harley riders who want and enjoy the image associated with the product.   Harley can continue to prosper, in a scaled-down mode, if they can keep this sliver of market-share.  As the author of the video above notes, while this might not attract the lion's share of bikers, it will attract enough to keep the company running.   As we said at GM back in 1979, you can sell a million cars and make a dollar on each one, or sell one car and make a million dollars on it - the latter apparently being Ferrari's marketing strategy.
So Harleys are not for everyone.   And maybe they shouldn't be.   So long as there are enough people who want to play "bad ass" on a hog, they will be able to sell to that crowd.  But expanding the customer base?  When overall ownership and ridership numbers are down, and in the middle of a recession?   It just isn't possible.  It was a bad idea to try, in retrospect.
Will Harley go bankrupt?  Possibly. Among other things they are hobbled by pretty high union wages and a lot of aging infrastructure - and production capacity that exceeds demand.  Oh, and the staggering billions in debt the board took on to cook the books and get their stock-option bonuses. Bankruptcy and reorganization could result in freedom from this debt and onerous union contracts, thus lowering their overall cost basis and raising their per-bike profit margins.  They still would have a niche market and high-priced bikes, but they could make a living with that business model, once freed of their debt and overhead burdens.
I made a little money on Harley stock - well over a decade ago.   It went up in value, and as I recall, I cashed a few dividend checks.  But it seemed to me that their marketing model had nowhere to go, even back then.  So I sold the stock, took my profits, and moved on.   And while Mr. See entertained the fantasy of having a pair of Harleys to tow behind the camper, the reality of motorcycling made him realize it was best left as a fantasy.  It really does seem like everyone in a car is trying to kill you, when you are riding a bike.   And that't not even addressing the costs involved, and whether his 5'8" frame could hold up a "hog" when he reached a stoplight.
No, it is a fun fantasy, to be sure.  Maybe for someone else. but not for me - or most folks, I suspect.
And I suspect most Harley riders are quite happy to keep it that way.
Share Share on Facebook Tweet Tweet on Twitter Pin it Pin on Pinterest
Back to Feed