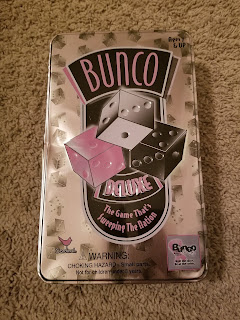 Gameplay:
Before you begin a round, go ahead and decide any trio of numbers. If anyone rolls that combination of numbers during the game, they get the fuzzy die! 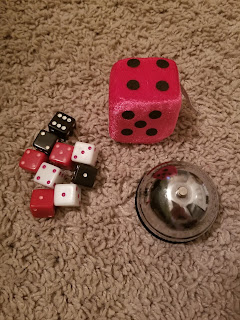 Every die that matches the number of the round being played scores one point. The dice roller keeps rolling all three dice until no points are scored. Play moves to the next person, who begins to roll and try to get as many points as possible.

Have a scorekeeper who will keep a running total of every player's score on scrap paper. Play continues with the dice being rolled and passed until someone scores 21 points.

Bunco - If all three dice rolled match the number of the round being played, a Bunco is scored. A Bunco is worth 21 points. At this time, the player shouts, "Bunco!", the bell is rung, and the round is over.

3 of a kind - If all three dice rolled are the same number but NOT the number of the round being played, you score five points.

Fuzzy Die Roll - Anytime someone rolls that special 3-number combination from the beginning of the game, the fuzzy die is tossed to that player. At the end of the entire game, whoever is holding that die gets a bonus score.

Ending a Round - When any player scores 21 points the round ends. Ring the bell!

How to Win:
After 6 rounds, the person holding the fuzzy die is awarded a bonus "W" (win). The scorekeeper adds up the amount of "W"s per player and the number of Buncos.

Fun for small amounts of friends and team play!